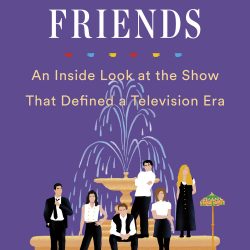 His event may be scheduled for a cold and blustery February evening, but author and pop culture historian Saul Austerlitz is bringing Berks County ‘Friends’ fanatics out of hibernation for his behind-the-scenes presentation about the blockbuster success of NBC’s sitcom ‘Friends.’ Premiering 25 years ago, the show continues to be an undeniable success, hailed as the most influential and beloved show of its era. Austerlitz comes to the Exeter Community Library to discuss his latest work, ‘Generation Friends: An Inside Look at the Show that Defined a Television Era.’

In his book, Austerlitz utilizes exclusive interviews with creators David Crane and Marta Kauffman, executive producer Kevin Bright, director James Burrows, and many other producers, writers, and cast members. ‘Generation Friends’ tells the story of the show’s creation, its remarkable decade-long run, and its Netflix-fueled afterlife.

Austerlitz is the author of four previous books, including ‘Just a Shot Away’ and ‘Sitcom.’ His work has been published by The Boston Globe, The New York Times Magazine, Esquire, Rolling Stone, Slate, and the Los Angeles Times. He is a graduate of Yale and NYU’s Tisch School of the Arts, and is an adjunct professor of writing and comedy history at NYU.

Of ‘Generation Friends,’ the Associated Press says Austerlitz has “written a love letter for fans of the show,” and in a starred review, Booklist calls it “a must-read for both new and old ‘Friends’ fans.”

Copies of ‘Generation Friends: An Inside Look at the Show that Defined a Television Era’ will be available for sale on site thanks to Reads & Company Bookshop, and Austerlitz will sign books after the event.

Literatour Berks is a community program bringing 18 authors in 16 exciting programs from October 2019 to June 2020 to Berks County. This program is presented by Jewish Federation of Reading/Berks in partnership with Exeter Community Library and Sinking Spring Public Library. A complete list of authors and topics can be found at www.readingjewishcommunity.org/home/literatour. Additional support in the form of community patrons is acknowledged and appreciated.

The Exeter Community Library aims to serve the community as a center of learning, accessible recreation, practical tools, and nearly 500 free programs designed for children and adults to participate in throughout the year. For hours of operation, visit www.berkscountylibraries.org/exeter.