The Den by Sly Fox Opens at GoggleWorks

by GoggleWorks Center for the Arts 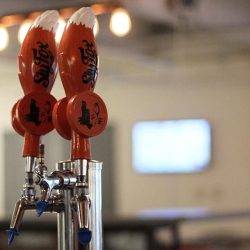 Late last year, the public-private partners revealed their intention to open the brewing company’s fifth location at GoggleWorks, one of the nation’s largest art centers, located in downtown Reading, Pennsylvania. As a part of the new partnership, The Den will also cater GoggleWorks’ many events on campus and bring unique music and social events to the city.

“Our audience is enthralled by the opening of The Den,” said Levi Landis, executive director of GoggleWorks. “They paid special attention to designing a fresh menu, expanding hours of operation, and hand-crafting features in the front of house-the result is a restaurant that compliments the beauty of the art we present.”

The Den features a variety of fresh and custom, made-to-order sandwiches, salads, soups, appetizers, and light breakfast options. At the heart of the menu lies the signature dishes like The 1871, named for the date of the construction of the Willson Goggle Factory, which now headquarters GoggleWorks; or The Albie, named after the art center’s co-founder, the late Albert Boscov.

Located adjacent to the Cohen Gallery on the first floor, Sly Fox’s newest spot boasts a fully-stocked, custom-constructed bar with wines, cocktails, and the brewery’s popular beers. The dining experience is casual, with seating at custom high tops, in the outdoor courtyard, or the main lounge – an open-ended entry into a world of visual arts.

“We love the idea of collaborating here,” said John Giannopoulos, Sly Fox Hospitality Group Managing Partner. “Sly Fox has always been a creative maker and this partnership is inspiring.”

The Den’s regular hours of operation are:

Since their inaugural brew in 1995, Sly Fox has crafted more than 100 different top-notch craft beers. Their critically acclaimed year-round lineup and highly anticipated seasonals are available in their pubs in Phoenixville, Pottstown and Wyomissing, as well as top bars and restaurants in PA, NJ, NY, MD, DE, VA, and Washington, DC. Sly Fox was the first craft brewery in the mid-Atlantic to implement a canning line, adding it to their facility in 2006, and with it, earned the first-ever Great American Beer Festival (GABF) medal awarded to a canned craft beer, in 2007. They have earned GABF medals virtually every year since, including a gold medal for Grisette Summer Ale in 2017, and are widely recognized among the region’s best and most enduring craft breweries.www.slyfoxbeer.com

About GoggleWorks Center for the Arts