ANNVILLE, Pa. – Albright sophomore Gabby Boggs was named the MAC Commonwealth Defensive Player of the Week for women’s basketball, as announced by the conference on January 27. 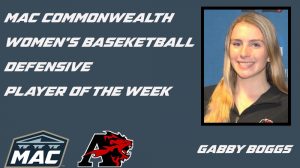 The honor is Boggs’ first career MAC weekly award and the sixth conference award for Albright women’s basketball this season.

Last week, the Northfield, N.J. native led a Lions’ defense to allow only 76 points over two conference victories.  Albright improves to 17-1 in the 2019-20 season and 8-1 in conference play.

Boggs pulled down 12 rebounds, 11 of them being defensive, in a 74-37 win against Alvernia last Wednesday.  Albright’s defense held the Golden Wolves to shoot just 21.3 percent from the floor as the sophomore blocked four shots and added six points.  In a 74-39 road win at Hood on Saturday, she registered a double-double behind 17 rebounds and 12 points.  Boggs shot 5-of-8 from the floor and 2-of-3 from the line, while the Blazers were held to 22.6 percent from the floor collectively.

The Mainland Regional graduate ranks third in MAC Commonwealth rebounding with 11.8 per game as well as field goal percentage with 54 percent.  Boggs is also fifth in the conference with 2.2 blocked shots per game and 10th with 1.9 steals per game.