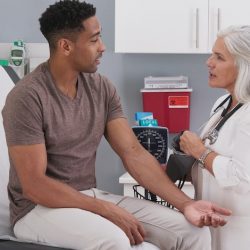 The ACA reduced the disparity in health insurance coverage between African Americans and white adults by 4.1%.

HARRISBURG, Pa. — The Affordable Care Act has reduced racial and ethnic disparities in access to health care, but that progress has stalled, according to a new report.

From 2013 to 2018 the uninsured rate for African Americans dropped by 10 percentage points to 14.4%, and the rate for Hispanic adults fell from more than 40% to 25%. According to Sara Collins, vice president for health care coverage with the Commonwealth Fund, the ACA also significantly reduced the gaps in health care coverage between white Americans and people of color, especially in states that expanded Medicaid.

“The racial gap narrowed so much that black Americans on average who are living in those states are now more likely to be insured than white Americans living in the states that did not expand Medicaid,” Collins said.

She cautioned that since 2016, that progress has stalled and some ground has been lost. But she said there are simple steps Congress and states can take to spur more improvements. Collins pointed out the stall is due in part to large states such as Texas and Florida that still haven’t expanded Medicaid. And cost is still a factor.

“There are some ongoing affordability issues buying health plans through the marketplaces for people who are just over the income threshold that makes them eligible for tax credits or a subsidy to buy insurance,” she said.

She said actions by the Trump administration to limit enrollment in marketplace plans also have had an impact.

Collins said if the remaining 14 states refuse to expand Medicaid, the federal government could help people in those states who would qualify to buy plans through the marketplace and take steps to make premiums more affordable.

“Allowing people whose incomes are just over $100,000 a year for a family of four who right now have to pay the full premium to be eligible for a subsidy really wouldn’t cost that much for the federal government to make that kind of change,” she said.