READING, Pa. – Sophomore Dejah Terrell has been named the Women’s DIII News Player of the Month for January, announced in the Jan. 29 edition of the Small College Hoops Women’s DIII Newsletter. 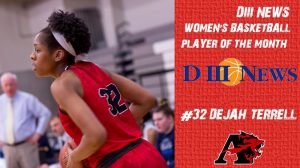 The organization recognized Terrell specifically for her performances in two games the week ending Jan. 19, as Albright continues its best start to a season behind a 17-1 record.

Albright fell 82-73 to Messiah three days later for the squad’s first loss of the season.  Terrell scored a career-high 41 points to set the program’s single-game scoring record, while going 15-of-28 from the floor, 4-of-7 from three, and 7-of-8 from the line.  She pulled down 15 rebounds and tallied three blocks, three assists, and one steal in the contest.

Terrell continues to pace the MAC Commonwealth with 22.8 points per game, and also ranks second in rebounding with 12.4 per game and in blocked shots with 3.0 per game.