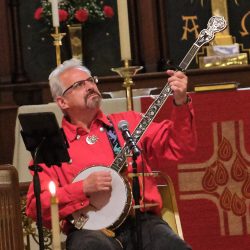 The original Christmas and holiday radio, TV, and internet special “Holiday Happiness”, created by local entertainer Dave Kline, has been honored with a 2020 Excellence in Broadcasting award by the Pennsylvania Association of Broadcasters.

“Holiday Happiness” featured recordings of only local musicians and talent from the Berks County community which were carefully curated, edited and sequenced by Kline. The program has been recognized with a first place honor from the PAB as judged by impartial evaluators and broadcast professionals from other affiliated state organizations.

The Judges Merit category is for creative projects that don’t fit easily into the usual categories of Best Broadcast Team, Best Radio Ad, etc. Twelve hours of the show aired on WEEU and WBYN radio on Sundays, in two hour segments over the 6 weeks leading up to Christmas from a November start date. Thirty additional hours of the show aired on Berks Community Television and BCTV.org nonstop throughout Christmas Eve and Christmas Day, with fanciful, seasonal video scenes added by BCTV. Kline has been making or collecting the recordings included in the compilation over the past 35 years.

“It’s nice to know that the judges deem localism worthy of recognition. Easily more than 100 hours of recording, editing and production work went into what became the final edits of this show,” Kline noted. He began working on editing the series in early October, and continued on diligently, even after a fire destroyed his family home (and studio) on December 14, 2019.

“I kept working on the final few shows in a temporary studio that my son helped me build. We were determined to not let the obstacle keep us from creating and sharing joy during the Christmas season. We used makeshift equipment and it wasn’t my best work, but we often judge ourselves way harsher than others on the outside looking in do. I have to again thank Fred Bernardo, Spyro Sbilis and Dave Lewis for offering me the use of their recording studios. My son and I were able to rapidly build a portable studio so I could work around the clock without disturbing anyone else’s schedule, but the fact that those three friends and colleagues literally offered me the keys to their studios will never be forgotten.”

This award arrives as Kline is launching a new ten-part podcast program honoring the 30th anniversary of the Boscov’s Berks Jazz Fest. He feels that the  recognition is encouraging and fulfilling.

“Forward we go. You can listen to any of these archived shows on-demand at the home site www.mountainfolk.com Gratitude! I will do my best to continue to give back through things like this. Congrats also to all other category winners. I believe that what we do is a calling.”