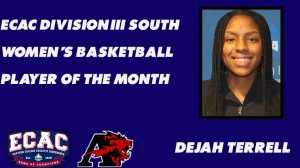 Along with the ECAC monthly award, the sophomore garnered the DIII News Player of the Month and her fifth Middle Atlantic Conference Player of the Week during January.  Terrell also earned her third spot on the D3hoops.com Team of the Week and became the first student-athlete from Albright to be recognized as the U.S. Basketball Writers Association (USBWA) DIII National Player of the Week.

Over seven games and six wins in January, Terrell averaged 27.1 points, 14.7 rebounds, and 2.6 rebounds per game.  On January 15, she scored 33 points behind shooting 12-of-20 from the field, a career-high 6-of-10 from three, and 3-of-3 from the line in a big 83-72 conference victory against Widener.  Terrell set the program’s single-game scoring record with 41 points in the Lions’ first loss of the season at Messiah on January 18.  She tied her career-high four assists on January 29 in a 70-48 win against Arcadia as she scored 22 points and pulled down 12 rebounds for her 15th double-double of the season.  During the month, Terrell tallied a total of 18 blocks and six steals in her 31.3 minutes on the court each game.

The Reading, Pa. native continues to pace the MAC Commonwealth and ranks fourth in DIII women’s basketball with 22.8 points per game.  Terrell also sits second in conference rebounding and blocked shots with 12.4 and 3.3 per game, respectively.

Tied for No. 11 in the Women’s Basketball Coaches Association (WBCA) Top-25 Poll and ranking No. 24 in the D3hoops.com poll, the Lions are 18-2 on the season and 9-2 in the MAC Commonwealth.