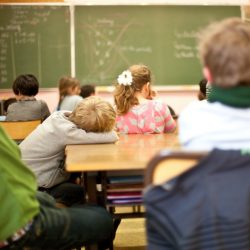 Pennsylvania ranks 44th in the nation for state share of education funding.

The proposed budget includes a package of initiatives that add up to $435 million more in classroom spending. But that won’t stop a pending lawsuit filed by the Education Law Center and the Public Interest Law Center, seeking to bring funding up to levels experts consider adequate.

Maura McInerney, legal director at the Education Law Center, said a one-year spending increase is welcome but insufficient to meet the needs of Pennsylvania children.

“We need a long-term strategy and deep investment to adequately and equitably fund all schools for all students across the Commonwealth,” she said.

In 2015, the Commonwealth Court dismissed the suit, saying courts cannot get involved in school-funding issues, but that was overruled on appeal, sending the case back to the Commonwealth Court. At a press conference last week, attorneys shared the latest schedule for the case; trial is tentatively slated to begin this fall.

Pennsylvania ranks 44th in state share of education funding, and the funding gaps between wealthy and poor districts are among the widest in the nation. McInerney said the school districts named in the lawsuit have given testimony about the consequences.

McInerney said the wealthiest districts in the Commonwealth spend 33% more per student than the poorest school districts. She said the goal is to get the state to adequately maintain and support a thorough and efficient system of public education that meets the needs of all students.

“The lawsuit would require the Legislature to address our broken school-funding system,” she said, “and ensure that it complies with the Legislature’s constitutional mandate.”

The lawsuit, William Penn School District vs. Pennsylvania Department of Education, was filed on behalf of six school districts with high proportions of children in poverty.

More information on the litigation is online here, and the lawsuit is here.