Skipper Returns After Leading R-Phils to the Playoffs Last Season

Shawn Williams is back at the helm after leading Reading to the playoffs in 2019, while Brad Bergesen was named the R-Phils new pitching coach as the Philadelphia Phillies announced their 2020 Minor League coaching staffs on Friday.

Bergesen replaces Aaron Fultz, who moves up to Triple-A Lehigh Valley after one season in Reading. Tyler Henson is back for his second year as hitting coach, and Nelson Prada returns as assistant coach. Kris Terrian replaces Mike Hefta as the team’s athletic trainer, and Kenny Matanane is back with Reading as the strength and conditioning coach.

In his first season in Baseballtown, Williams led the R-Phils to a second-half East Division title and the best overall record in the Eastern League at 80-59. Reading advanced to the playoffs before falling to the Trenton Thunder in three games in the East Division Championship series. 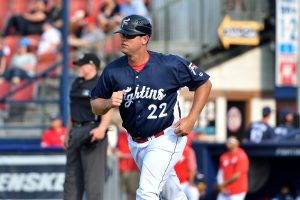 Williams joined the R-Phils after leading the Class-A Advanced Clearwater Threshers to a 144-131 record over two seasons, including a second-half title in the Florida State League North in 2018. Prior to his time in Clearwater, Williams also managed in Class-A Lakewood for two seasons (2015-2016).  He joined the Phillies player development staff in 2014 as a manager for Short-Season Williamsport, and was a player/coach for Williamsport in 2013. He spent four seasons in the Tampa Bay Rays minor league system as a utility player from 2007-2010.

His father, Jimy Williams, managed the Toronto Blue Jays, Houston Astros, and Boston Red Sox, and was the Phillies bench coach for two years (2007-2008). The elder Williams was named the American League Manager of the Year with Boston in 1999.

Brad Bergesen will begin his first season as Reading’s pitching coach after one season each in Lakewood and Clearwater. Drafted by the Baltimore Orioles in the fourth round in 2004, Bergesen was the organization’s Minor League Pitcher of the Year in 2008. He went on to pitch in 102 games over three seasons with the Orioles and one with the Arizona Diamondbacks, going a combined 19-25 with a 4.61 ERA in 424 innings.

Tyler Henson will be entering his second season as hitting coach for the R-Phils. He began his coaching career as an assistant coach with Clearwater in 2016, and spent the next two years coaching for Williamsport (2017) and Lakewood (2018). Henson played professionally for 10 years, seeing time at every position except pitcher and catcher. Drafted in the fifth round by the Baltimore Orioles in 2006, Henson played three seasons in the Phillies organization including 80 games for Reading in 2013, in which he hit .264/.340/.407.

Nelson Prada returns for his second season on Reading’s staff as an assistant coach, and his eighth season on the Phillies player development staff.  Prada served as the manager for Williamsport in 2013 and Clearwater in 2014, then joined Lakewood for three years (2015-2017) as a coach before heading up the Rookie-level GCL West team in 2018. Prior to his time with the Phillies, Prada played and managed within the Minnesota Twins organization from 1995 to 2012.

Kris Terrian enters his first season as the R-Phils athletic trainer, after spending last year in Lakewood. Terrian joined the Phillies organization in 2017 with Williamsport after a year as Boston’s minor league assistant athletic trainer in 2016. Prior to that, Terrian was an athletic trainer with the United States Ski and Snowboard Association for six years. He earned his bachelor’s degree in athletic training from the University of South Florida in 2010, and his master’s in health science from St. Augustine University in 2018.

Kenny Matanane returns to Reading for a second consecutive season and fourth total as the R-Phils strength and conditioning coach. He was previously with the R-Phils for the 2016 and 2017 seasons before working 2018 in Clearwater. Matanane has also spent time working for Washington State University (2007, 2012-14), Class-A West Virginia in the Pittsburgh Pirates system (2011), and the NFL’s Seattle Seahawks (2008-10). He earned his master’s degree in exercise science in 2007 at Central Washington University.

The R-Phils will open the 2020 season at home on Thursday, April 9th, with first pitch at 7:10 p.m. against the New Hampshire Fisher Cats. Season tickets and mini plans for the 2020 season are on sale now at the Weidenhammer Ticket Office at FirstEnergy Stadium, online at https://www.milb.com/reading/tickets/, or by calling 610-370-BALL.