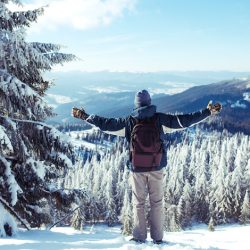 Winter backpacking gives hikers a unique perspective on the beauty of wilderness areas.

Friends of Allegheny Wilderness will be hosting its annual winter backpacking trip on March 7 and 8.

This year the hike will follow a trail into the proposed Morrison Run Wilderness Area, giving backpackers an opportunity to see and experience one of the largest intact blocks of forest in the Allegheny National Forest.

But according to Kirk Johnson, executive director of Friends of Allegheny Wilderness, unlike some tracts, Morrison Run’s almost 7,000 acres of untrammeled forest is not safe from logging.

“They could plan a timber harvest within that area at any time,” he points out. “That means there really is a good deal more urgency for Morrison Run to get protected as a wilderness area.”

The backpacking trip into Morrison Run is free, but participants must bring their own food, water and camping gear. For more information you can email [email protected]

Johnson points out that, out of 8,200 public comments the U.S. Forest Service received on its draft forest plan, more than 6,800 favored protecting all of the areas included in the Friends of Allegheny Wilderness’ Citizens’ Wilderness Proposal.

“That means that more than 80% of the public supports this idea of preserving Morrison Run and the other areas of Allegheny National Forest,” he states.

Johnson says he’s not opposed to traditional uses, including logging, in some parts of the Allegheny National Forest, but areas where logging is not a significant activity need federal protection.

Johnson hopes taking the opportunity to camp out in the Morrison Run Wilderness Area will give campers a different perspective on a natural treasure that should be preserved for future generations.

“It’s a very unique experience to get out and enjoy the wilderness during the winter months because there’s different opportunities for wildlife viewing and you see it in an entirely different light,” he states.

Morrison Run is one of eight areas included in the Citizens’ Wilderness Proposal for Pennsylvania’s Allegheny National Forest.