China and Baumann Sweep Conference Player of the Week Honors 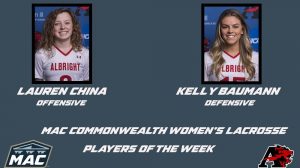 China netted eight goals during the week and posted a .727 shot percentage. She opened the week with two goals in the Lions season opener against Cabrini last Tuesday, and followed that with a career-high six goals in a 16-7 win against Brigdewater on Saturday. The sophomore also picked up five ground balls during the week. China scored 45 goals last season in her collegiate career debut, and led all scorers in the conference during the past week of games.

Baumann paced the conference with eight caused turnovers during the past week of games. She opened the week with three caused turnovers in the first half against Cabrini, and helped shut down the Bridgewater offense on Saturday with five caused turnovers. She helped lead a stalwart defensive effort that limited the Eagles to seven goals. The New York State native also picked up six ground balls, and posted a seven-point game on offense against Bridgewater. Last season, Baumann ranked second in all of NCAA Division III in caused turnovers.

The Lions will return to action on Saturday, February 29th as they will host Ursinus in non-conference action at noon.