by The Heritage at Green Hills 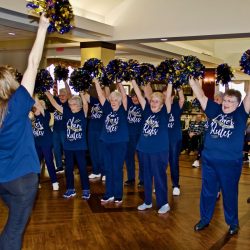 New Heritage Hotties Team Members Cheer by Their Own Rules!

SHILLINGTON, Pa. –The “Heritage Hotties,” a silver poms cheerleading team made up of residents of The Heritage of Green Hills, a healthy life plan community in Shillington, Pa., gave its debut performance on February 24. Thirteen members of the squad performed an enthusiastic routine set to the Bobby Day classic “Rocking’ Robin.”

The Heritage Hotties squad was formed when a group of residents saw the feel-good movie “Poms,” and thought it would be fun to start a team of their own, like the heroines in the film.

Luckily, Resident Carol Lauer’s granddaughter is Elizabeth Lavanga, the former Berks Catholic Varsity Cheer Captain. The pre-med student at Penn State offered to help organize a team over her break as a community-service project. Lavanga also put together choreography that would be beneficial for seniors.

“Elizabeth did a great job of using Heritage’s model of health and wellness through activity and fun to inspire her routine,” says Cheryl Anderson, the community’s Well By Design Director. “She planned movements that help with balance, stretching, memory and endurance.”

Now members of the Heritage Hotties squad suit up in matching “Cheer by your own rules” t-shirts every Monday to practice, move, laugh and have a great time together shaking their blue and gold poms.

The team is open to all residents, including those who prefer to cheer from a seated position. Enthusiasm is the only requirement. Some members of the Heritage Hotties have cheerleading experience from high school and college.

Others, like Carol Lauer, are completely new to the sport. “I’m glad to do it, because I wanted to be (a cheerleader) when I was in high school and I never got the chance,” Lauer said. “The Heritage of Green Hills is a great place. We get up and around. We do things and we laugh about it. It’s just nice.”

After the performance, the team and their fans enjoyed a screening of the film “Poms” and ice cream sundaes.