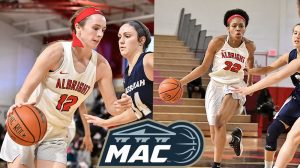 In addition to being named Defensive Player of the Year, Boggs’ second team nod was the first all-conference honor she has earned in her collegiate career.  The Northfield, N.J. native tallied 13 double-doubles in 26 games so far this season, while leading the team with 33.6 minutes played per game.  She posted four career-highs, including scoring 20 points at Alvernia on Feb. 18, blocking five shots at Lebanon Valley on Dec. 7, and registering seven steals against Lebanon Valley on Feb. 8, the most in a game for Albright since the 2017-18 season.  Boggs pulled down 18 rebounds on two separate occasions, both being against Stevenson on Jan. 4 and Feb. 5.

Boggs is second in the MAC Commonwealth with a field goal percentage of .512 behind shooting 111-217 from the floor this season and is third in conference rebounding with 12.2 per game.   With 54 blocks, the sophomore is second on the team and ranks fifth in the conference, while ranking second for the Lions with 66 assists and 10th in the MAC Commonwealth.  Boggs leads the squad with 55 total steals and is sixth in the conference with 2.1 per game.

Terrell adds All-MAC Commonwealth First Team honors to her list of accolades from her current standout season.  The Berks Catholic product has earned eight conference player of the week awards and picked up ECAC Division III South Player of the Month twice, DIII News Player of the Month, and D3hoops.com Team of the Week three times.  Her awards are highlighted by being named the U.S. Basketball Writers Association (USBWA) National Player of the Week on Jan. 22 – the first student-athlete from Albright to do so.

Currently leading the MAC Commonwealth by over 80 points, Terrell averages 22.5 points per game and also paces the conference in blocked shots with 3.1 per game.  The sophomore pulls down 12.7 rebounds per game to sit second in the conference.  In 20 of Albright’s 26 games so far this season, she has recorded double-doubles.  Terrell holds the program’s record for most points scored in a single-season with 584 and has registered 329 rebounds in 26 games.  She posted a career-high 41 points at Messiah on Jan. 18 to hold the single-game scoring record for Albright women’s basketball.  Terrell also went 6-of-10 from beyond the arc on Jan. 15 in an 83-72 victory against Widener and pulled down a career-high 26 rebounds against Hood on Dec. 14.  Blocking seven shots on two occasions, at Moravian on Dec. 16 and Stevenson on Feb. 5, she is tied for the third-most blocks in a single-game in program history.

In NCAA DIII women’s basketball, Terrell is tied for the top spot with four others after accumulating 20 double-doubles.  She is third overall in total points with 584 and fourth in defensive rebounds per game with 9.7, while sitting sixth with 22.5 points per game.  Boggs ranks 11th overall in NCAA DIII in rebounds per game and as a team, Albright is sixth in DIII with 158 blocked shots.

Boggs and Terrell combine for over half (646) of the Lions’ 1231 rebounds and for 135 of Albright’s 158 blocks so far this season.  With the two’s honors, head coach Janice Luck totals 28 All-MAC Commonwealth Team awards and four players of the year in her 18 seasons at Albright.

The Albright women’s basketball team will travel to Messiah tomorrow, Feb. 29, for the MAC Commonwealth Championship Game at 7:30 p.m.

The complete All-MAC Commonwealth team for women’s basketball is below.