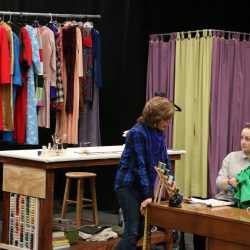 Set in a tailor shop in Queens, NO GOOD THINGS DWELL IN THE FLESH is a new play about a Russian master tailor whose skill and perfectionism have amassed a clientele she can no longer sustain on her own. She enlists the help of a protégé who is talented, but also conflicted about putting her personal ambition ahead of settling down to start a family. The tailor staggers through this uncertainty, embellishing her sewing lessons with political conviction, striving to not only pass on a dying art, but also ensure the next generation is not as hampered by oppressive cultural expectations as she was. The reemergence of her own deranged, former suitor further threatens her plans and forces her to confront the kinds of limits she’s faced her entire life and shrewdly turned to her advantage by sheer strength of will.

Thematically, the play challenges the hidden apparatus of privilege; taking issue with social and cultural systems that accord privilege to some and deny it to others. The play foregrounds an underrepresented perspective, situating a marginalized immigrant tailor at the heart of the story.  Making the tailor’s experiences real and vivid for the audience fosters a transformative encounter with “the other” – as the play progresses, that sense of otherness dissolves to reveal a human life as transcendent and insubstantial as the beloved garments entrusted to her care. 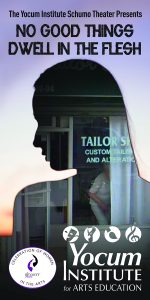 About the Playwright: Christina Masciotti (playwright) is Guggenheim Award-winning playwright whose work has earned comparisons to Samuel Beckett and been described as “priceless” by Ben Brantley of The New York Times (2015, 2017). One of The New York Times’ 2015 “Faces to Watch,” her most recent production, Raw Bacon from Poland (2017), was a New York Times’ Critics’ Pick, and her earlier work includes: Social Security, a five-star reviewed Time Out New York Critics’ Pick, cited as a Best Show of 2015 by Helen Shaw, and recognized with an honorable mention from The Kilroys; Adult (2014) a Time Out New York Critics’ Pick; Vision Disturbance (2010), a Time Out New York Critics’ Pick which has toured domestically and internationally from 2011-2017, and was also one of Time Out New York’s Top Ten Shows of 2010. Her work has also been anthologized by Smith and Kraus and Applause Theater and Cinema Books: Best Contemporary Monologues for Women (2014, 2016) and The Best Men’s Stage Monologues of 2018. She is currently a playwright-in-residence at Lincoln Center Theater. christinamasciotti.com

About Celebration of Women In The Arts: The Celebration presents an opportunity to focus on female artists in all genres, feature works created in multi-disciplinary art forms and facilitate a greater collaboration amongst our community. The Celebration includes special exhibits, presentations and education programs from January to June 2020.

The concept of Celebration of Women was inspired by the Bennett Prize. “The Bennett Prize, created in 2018, awards $50,000 to a woman artist to create her own solo exhibition of figurative realist paintings, which will travel the country. The Prize will propel the careers of women painters who have not yet realized full professional recognition, empowering new artists and those who have painted for many years. The Prize will expand opportunities for the public, who may not be familiar with figurative realist painting, to learn more about the creative vision of talented women painters in this increasingly popular genre.”(www. (https://thebennettprize.org/).

The goals of the Celebration of Women are: To raise awareness of women artists, composers, authors, filmmakers, etc.. with the idea of creating a richer cultural environment by recognizing all gifted individuals regardless of gender, race, etc..

Providing Leadership Development and education opportunities to women artists and our next generation of artists about the contribution of women have made and continue to make in the arts and culture sector of our community.

Sending the message to young women pursuing a career in the creative arts that the sky is limit.

Bring together local arts organization to collaborate on events and sharing their expertise in the areas with goal of building a stronger arts community.

Be an economic driver for the local economy.

Bring regional and national attention to Berks County by presenting a relevant topic which brings our community and offers experiences not found in other areas.

The Celebration of Women will provide many opportunities for women across our business, nonprofit, and government sectors to become engaged in education programs, mentoring, planning programs, and sharing their knowledge, skill and expertise with each other and the younger generation.