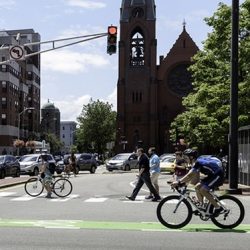 2020 Census Will Inform Funding for Environmental Programs, Including Mass Transit

Cities across the United States striving to reduce their carbon footprints are awaiting results from the 2020 Census to help plan public funding of “green” programs.

Reducing a city’s environmental impact is one way census responses can shape the future of critical public services in communities. Responses to the 2020 Census will inform funding for programs such as Federal Transit Capital Investment Grants that can be used for public transportation and Water Pollution Control grants.

Communities can use funding from these programs to gear their efforts toward improving infrastructure and sustainability.

Madison, Wis., is one city eager to finance and potentially expand its public transportation systems after the 2020 Census is completed.

“The metro and public transit here in Madison, and other communities, relies on federal funding for their year-to-year operations and for the acquisition of buses and things like that,” said Benjamin Zellers, a city planner who is leading the Madison Complete Count Committee. “The 2020 Census has been a pretty significant piece of the transit funding puzzle.”

Madison is described as a “green city” for several reasons. Its downtown is between two lakes and people who live there appreciate the parks and green spaces in the area, Zellers said.

The League of American Bicyclists ranks Madison as a platinum bicycle-friendly community. More than 5% of workers commute to work by bicycle every day, according to the Census Bureau.

In addition to maintaining the current public transportation system, the city intends to pursue a large-scale expansion of local transit with its new Bus Rapid Transit system, or BRT.

The system will reduce environmental pollution and result in cleaner air quality, according to the city. Results of 2020 Census responses can influence funding decisions for this project.

“Investing in transit is important, and we look forward to having the new census information to help inform the decisions made along the way for creating the future BRT system,” Zellers said.