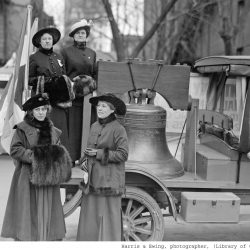 Reading, PA – In 1915, the Justice Bell travelled on a flatbed truck to all 67 counties in the state of Pennsylvania with its clapper stabilized, not to ring until women were given the right to vote. This year, on the 100th anniversary of the 19th Amendment, the Justice Bell will ring loudly when it is at the Berks History Center, starting on March 10, 2020 through April 7, 2020.

We invite the community to visit the Berks History Center, located at 940 Centre Ave., Reading, PA 19601, to enjoy the traveling exhibit of the Justice Bell on March 14, 2020 at 10:00am during “Votes for Women,” the kickoff event of the Berks Suffrage 2020 Centennial, a county-wide, non-partisan celebration of the 100th anniversary of women having the right to vote.

Transported from the Brandywine River Museum, the Justice Bell will arrive at Berks History Center on Tuesday, March 10, 2020. The bell will remain on display at the Berks History Center until April 7, 2020, when it will be moved to another county. While the Justice Bell united the women of the early 20th century in their desire for the right to vote, today it will unite the people of Berks County with other counties in Pennsylvania during its state tour on the 100th anniversary of the 19th Amendment.

The Justice Bell will serve as an educational centerpiece at the Berks History Center museum during National Women’s History Month and will help to kick-off the Berks Suffrage 2020 Centennial on March 14th. The Justice Bell demonstrates the diligent efforts of suffragists, not only in Berks County, but in the state of Pennsylvania and beyond.

“We are very excited to be hosting the Justice Bell at the Berks History Center,” remarked Executive Director, Benjamin Neely, “This is a once in a lifetime opportunity for our community to participate in a state-wide initiative that celebrates Pennsylvania’s unique contribution to the suffrage movement.”

Owned and transported by the Justice Bell Foundation, the visiting Justice Bell is a replica of the original Justice Bell, which is currently preserved in the Washington Memorial Chapel in Valley Forge National Park.

According to the Reading Times, the original “Other Liberty Bell” first visited Berks County on October 13, 1915, when it was met by a group of Berks County suffragists led by Mrs. Emily Habel in Adamstown. The bell also made stops in Shillington, downtown Reading, City Park, Friedensburg, Yellow House, Boyertown, and Hereford.

The Justice Bell’s 2nd visit to Berks County was made possible from the generous support of the Berks Women’s History Alliance and their tireless volunteers.

Also, for an in depth look at the Justice Bell’s history, Executive Director of The Justice Bell Foundation, Ms. Amanda Owen, will provide a 45-minute presentation of rare photos that document the inspiring story of women’s fight for the vote and how the justice bell became an icon of the Women’s’ Suffrage movement on March 28th at 10:00am at the Berks History Center.

Admission to the program is $8.00 for non-members, $5.00 for members and includes free admission to the BHC museum. Light refreshments will be provided.

For more information on the history of the Justice Bell visit https://www.justicebell.org/