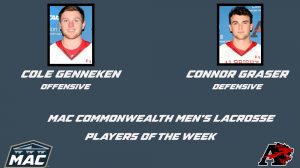 Genneken paced the Lions offense in the past week with 10 points behind seven goals and three assists. He opened the week with four points against Immaculata last Thursday on two goals and two assists. Genneken followed that with six points behind five goals and one assist in the Lions 11-9 win over Mount Saint Mary (NY) on Saturday afternoon. Genneken scored the Lions final three goals as they broke an 8-8 tie with just over five minutes left in regulation. The Vernon, N.J. native has registered 17 points in the last three games with 13 of the points being goals. Genneken currently ranks second in the conference with 17 goals, and third with 3.40 goals per game.

The Lions return to action on Wednesday, March 11 as they will travel to face Wesley in non-conference action at 4 p.m.