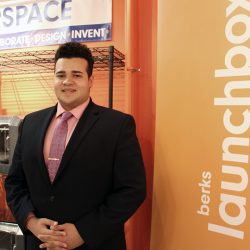 From the time Tristan Morales enrolled at Penn State Berks in 2016, he seized every opportunity that came his way. Today Morales is an entrepreneur and one of the founding members of Traduki Technologies LLC, a startup that uses real-time technology to reduce language barriers. He is also a senior with a double major in Information Sciences and Technology and Security and Risk Analysis and a minor in Business. In addition, he is working toward a National Security Agency Certificate.

For Morales, his interest in entrepreneurship began when he got to know fellow student Ryan Morris ’19, a Business major with a minor in Entrepreneurship and Innovation, who was developing an idea for a real-time translation app as part of an Entrepreneurial Mindset course, along with two other students. Morris invited Morales to join the team as he had technological expertise that would be an asset to the operation. After the course ended, Morris and Morales were encouraged by their professor to purse the project as a startup business.

They continued to work together and collaborate on the project, working through the Flemming Creativity, Entrepreneurship and Economic Development Center on campus. Soon the idea gained traction and they formed valuable connections to mentors and business leaders in the community.

In 2019, Morris graduated and received a prestigious Schwarzman Scholarship to pursue a master’s degree in global affairs at Tsinghua University in Beijing. He remains actively involved in Traduki Technologies, and Morales continues to work on defining customer markets along with Ryan Morris’ sister, Caitlin Morris, who has joined the company as a customer discovery officer.

According to Morales, the focus of Traduki Technologies is providing a platform for service industries, such as health care networks. They plan to begin by launching the startup in the Greater Reading area.

Morales explains that one turning point for him was the opportunity to attend the Black and Brown Founders Project Conference in Oct. 2017, at the University City Science Center in Philadelphia. The organization’s founder, Aniyia Williams ’07, an alumna of Penn State Berks, discussed issues faced by entrepreneurs of color. Morales was motivated by what he heard, stating in an interview, “At the conclusion of the conference, I walked away with insight on how to correctly run and build a business in the technological society that we are currently living in, which included various financial, marketing, and business strategies.”

As part of the college’s social enterprise initiatives, he conducted research for Opportunity House, the Reading emergency shelter. The research gauged demand in the Greater Reading area for hydroponics, an option that Opportunity House is exploring to raise funds for the organization.

Morales was born and raised in the City of Reading. His older brother Tye graduated in 2016 with a B.S. in Mechanical Engineering with dual minors in Biology and Chemistry and is currently studying to be a physician’s assistant at Penn State Hershey. His younger brother Tahj is a junior Biochemistry and Molecular Biology major at Penn State Berks. All three brothers, as well as two other siblings, attended Reading High School. Their father is originally from the Bronx and their mother is from Puerto Rico.

“Penn State Berks is the only college that I applied to,” states Morales.

The entrepreneurial spirit runs in the Morales family. His father owns his own landscaping business, and the entire family is involved. His mother, who works as a respiratory therapist at Penn State Health St. Joseph, took over the business when his father had double knee surgery.

In addition to his work as an entrepreneur, Morales completed an internship with Pfizer at their Collegeville campus, where he worked on the company’s backend development. He also made the Dean’s List and found time to get involved on campus, serving as a Lion Ambassador and a member of the college’s Information Technology Club and Entrepreneurship Club.

When asked what he plans to do after graduation, Morales states that he is fortunate to have been offered a position with Lockheed Martin in their Space Division as a System Engineer.