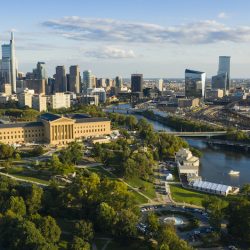 A recent report from Rutgers University projected sea levels will rise 2.5 feet by 2050 and up to almost nine feet by the end of the century. According to Jeff Tittel, director of the New Jersey Sierra Club, the tides in rising seas already are driving saltwater up the Delaware River, the source of Philadelphia’s drinking water.

“It can actually get very close to the Schuylkill during drought,” says Tittel. “And given sea-level rise and the chance for longer droughts, it could go even further, threatening the water-supply intakes.”

At its business meeting on Wednesday, the Delaware River Basin Commission focused on mitigating and adapting to climate change.

“Especially in the city of Philadelphia along the waterfront and around the Navy Yard and around Philadelphia International Airport,” says Tittel. “And, of course, the low-lying areas on the other side in New Jersey as well.”

He is calling on the Delaware River Basin Commission to start planning for climate change and putting regulations in place to deal with it.

Tittel says steps can be taken now to start limiting the impact of rising waters and more frequent flooding.

He emphasizes that slowing climate change by cutting greenhouse-gas emissions still is possible, but it needs to be done now.