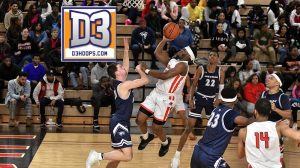 This is the first All-Region selection for Majekodunmi in his collegiate career, and he is the first Albright player to make a D3hoops.com All-Region team since DeJuan Smith was named to the Second Team in 2018.

Majekodunmi registered 13 20+ point outings this season, and three 30+ point performances. He scored in double-figures in all but two games on the season. Majekodunmi now has scored 1,267 points for his collegiate career, currently ranking him 25th all-time in Albright program history as he enters his senior year.

Players were nominated for these awards by the sports information directors at the various schools. There were more than 769 players nominated nationwide. The ballot was then made available to SIDs, who voted for a predetermined number of players in their region.

This is the 19th year D3hoops.com has named an All-Region team and this year’s All-America team will be the 23rd annual All-American selections. The D3hoops.com All-American teams, along with those of the respective coaches’ associations, are the only ones recognized in the NCAA record book.