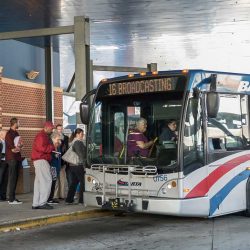 The South Central Transit Authority (SCTA) Board announced proposed changes for BARTA bus fares at its March 18, 2020 Board Meeting. The proposed fares would take effect July 1, 2020. Under the proposal, SCTA is simplifying the BARTA fare structure and eliminating the fare zones. The new, proposed fare structure would only have a base zone fare. The cash fare would increase $0.10 to $1.80. The student cash fare would change to $1.00 per ride. The Half Fare Cash Fare for eligible persons with disabilities would increase to $0.90.

Transfers are proposed to change to no charge. Customers will still need to request a transfer slip to use on their second bus when completing their trip. If customers do not have the transfer slip, they will be charged full fare on the second bus.

A Public Hearing is scheduled for Tuesday, April 14, 2020 from 4:00 p.m. to 6:00 p.m. at the BARTA Administrative Offices, 1700 North 11th Street, Reading, PA 19601 to receive any comments. If any person is unable to attend the public hearing, comments may be emailed to BARTA at [email protected] or mail to BARTA Fare Hearing, 1700 North 11th Street, Reading, PA 19601. Please note: Due to the ongoing COVID-19 situation, it is encouraged for the public to email, write or call to communicate their comments instead of physically attending the public hearing as a last resort.