Albright Lions women’s basketball sophomore Dejah Terrell was named to the 2020 All-Middle Atlantic Region First Team by D3hoops.com, as announced by the website on March 18.

She is the first Albright women’s basketball player to earn All-Region honors from D3hoops.com since Alysha Lofton back in 2018 when she earned first-team honors. 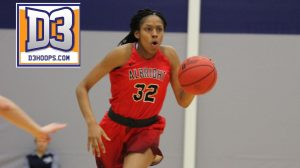 For the first time in her career, Terrell adds First Team All-Region to her list of accolades.  In the 2019-20 season, the Berks Catholic graduate tallied eight conference player of the week awards, while earning First Team Middle Atlantic Conference (MAC) Commonwealth honors, ECAC Division III South Player of the Month twice, DIII News Player of the Month, and D3hoops.com Team of the Week three times.  These awards are highlighted by being named the U.S. Basketball Writers Association (USBWA) National Player of the Week.

Leading the MAC Commonwealth, Terrell averaged 21.7 points and 3.1 blocks per game.  She also ranked second in conference rebounding with 12.4 per game.  Terrell holds the program’s record for most points scored in a single season with 608 and registered 346 rebounds.  She posted a career-high 41 points at Messiah on Jan. 18 to hold the single-game scoring record for Albright women’s basketball.  Terrell went 6-of-10 from beyond the arc on Jan. 15 against Widener and pulled down a career-high 26 rebounds against Hood on Dec. 14.  Blocking seven shots on two occasions, she is tied for the third-most blocks in a single game in program history.

After advancing to the NCAA Tournament for the fifth time in program history, the Lions concluded the season by falling to Williams, 68-46, in the first round.

Players were nominated for these awards by the sports information directors at the various schools. There were more than 769 players nominated nationwide. The ballot was then made available to SIDs, who voted for a predetermined number of players in their region.

This is the 19th year D3hoops.com has named an All-Region team and this year’s All-America team will be the 23rd annual All-American selections. The D3hoops.com All-American teams, along with those of the respective coaches’ associations, are the only ones recognized in the NCAA record book.