Working from Home in the COVID-19 Era 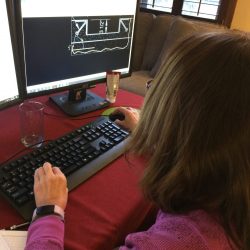 In the makeshift home office in her living room, Tina Wise prepared to join the daily Structural Department meeting of RPA Engineering via video conferencing, with the department’s staff all working from home due to Gov. Wolf’s order to close all non-essential businesses due to the COVID-19 virus.

Participating in the meeting with Wise were Eric Roth, Manager of Design, Structural Engineering, Engineers Jon Belinski, and Alex Lee.

As the meeting began, Roth asked Lee why he had his video option closed.

The touch of humor was appreciated by the team members, who would normally be meeting face-to-face to review the status of projects that each of them are working on. 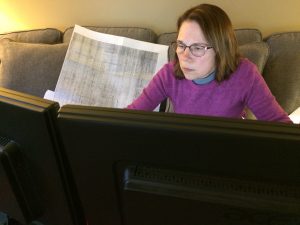 Wise, a Senior Structural Designer with RPA, has been working from her Shillington home since the department members packed up their computers and drawings on Friday, March 20.

Working at home has been an adjustment. Along with the benefits of no commute and non-existent dress code, there are challenges – such as the fluctuation of internet speed and inability to confer with co-workers by simply walking over to their desks.

Wise must rely on her home internet service to connect with the internal network of RPA in order to access the drawings, specifications and design software required to work on her current projects, including a car rail foundation for a melting facility and structural supports for roof-mounted HVAC equipment. 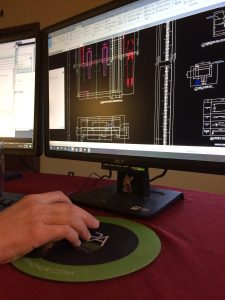 “The internet is pretty fast when I start working early in the morning (6:30 to 7 a.m.), but slows to a crawl after lunchtime. With so many other people now working from home and families using the internet for video downloads and streaming it is getting clogged up a lot more often.”

With the absence of her work colleagues at home, Wise’s only office mate is her dog, Asia, who lends moral support and companionship despite his design skill limitations.

“I’ve found it best to maintain my normal workday routine as much as possible. I get up at the same time, walk Asia, make a pot of coffee, start working, take a lunch break, work through the afternoon, and try to finish up at the same time as if I had gone into the office.” 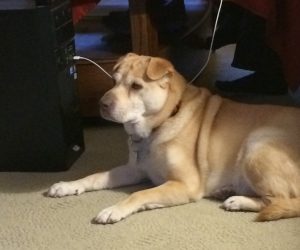 “I was not expecting RPA to be shut down. Our employees were strongly encouraged to take advantage of a work-from-home policy initiated about a week prior to the mandatory shutdown. Many of them did. People in our department chose to come in.”

How much longer does she expect to be working from home?

“I hope it’s no longer than two more weeks.”

Despite the somewhat decreased productivity due to occasional distractions, slower internet connectivity, a less-than-ideal home office setup, and isolation from co-workers, Wise is grateful to be able to work at home – and to have a job when so many others have lost theirs.