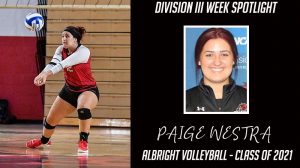 Paige Westra set career bests in nearly every statistical category during the 2019 season. She registered 106 kills behind 1.54 kills per set to rank second on the team, and tallied 159 digs on the season as well. Westra added 34 service aces, and matched a single-game program record with 11 service aces in the season opener against Penn State Schuylkill. Westra and her teammate, Shelby Cheuvront, each matched that record that was last set back in 2001. Her strong 2019 campaign came off missing the entire 2018 season due to an injury. Westra saw extended playing time during her first season on the team back in 2017 as she posted 227 digs, and led the team with 33 service aces.

What do you like most about Albright College?
“I love the social life that comes with being a student-athlete as well as all of the fun activities and events the college offers. I am a digital studio art major, and I love the professors that are in the field of study.” 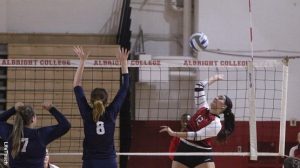 How do your teammates make practice fun?
“We all try to have as much fun as we can while staying focused. We have inside jokes and just make each other laugh most of the time.”

Do you have any pre-game superstitions?
“I don’t have any, but I have learned to always go into a game with a new slate and mindset. I make sure to visualize what you want to happen in the game, and think positivity.”

What is one thing people do not know about you?
“I’ve played every position on the court except setter, and I’m currently on my 3rd year of coaching club volleyball!”

What is your favorite song to listen to prior to competing?
“I listen to a bunch of remixes that get me hyped and excited.”

What is your current favorite memory as a member of Albright athletics?
“There are too many memories to count, but I love the feeling of when our team plays the best we can. It is even better when it’s a great game as well! My most recent favorite memory that I love was when we beat our rival Alvernia in a five-set game. It was an amazing game, and everyone played so well. It was a great way to end the season!”

Why did you choose Division III?

“I chose Division III because I came to school to earn an education, and I didn’t want my athletics to consume my life. I needed to have a nice balance between getting my education, a social life, and playing the sport I love.”