from St. Catharive of Siena School 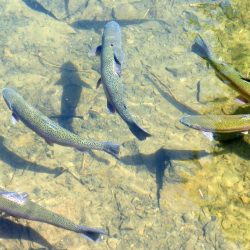 On October 8, 2019, a special delivery arrived at St. Catharine of Siena School in Mount Penn. A box of rainbow trout eggs and “alevin” (recently hatched fish) were delivered to the school thanks to a Trout in the Classroom grant in coordination with Berks County Conservation District and the PA Fish and Boat Commission.

The “Trout in the Classroom” became a school-wide treasure, with classes checking on them frequently to observe and study their growth from small fry to full grown trout. Original plans were made to release the trout with student participation into Antietam Creek on Earth Day, and the entire school looked forward to April 22, 2020, with anticipation.

And then a change in plans. On April 9, Governor Wolf and the PA Secretary of Education made the definitive decision that all PA K-12 Schools would remain closed for the rest of the 2019-2020 school year.

Principal Mrs. Marcella Kraycik says the school transitioned quickly to implement their contingency plan: “Knowing the necessity for social distancing and wanting to ensure the continued health of our SCS Students, SCS Chaperones, and our SCS Trout; a small team formed to release the trout. Although not what was originally planned; great care, preparation, and consideration went into this micro-release of our Trout.”

On April 22, the St. Catharine of Siena School community received the news that the Rainbow Trout had been released into Antietam Creek, and a special video produced by Emma Fries, daughter of Mrs. Fries was released to capture and celebrate the special event.