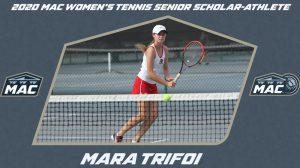 Trifoi becomes the first Albright student-athlete to be named a MAC senior scholar athlete since Ken Richardson earned it for men’s swimming during the 2016-17 school year. She also becomes the second women’s tennis player in Albright program history to earn the accolade since Victoria Foanio won it back in 2014.

Trifoi is a two-time MAC Commonwealth women’s tennis player of the year, winning the award in her first two years on the team. She went a perfect 6-0 in MAC Commonwealth during her first-year of 2016-17 out of the No. 1 position for the Lions. She also did not lose in non-conference dual match action during the same season. Trifoi was the first player to be named both MAC Commonwealth Player and Rookie of the Year in the same season since another Albright player, Foanio earned those honors as well in 2011.

She followed that by posting a 14-3 overall record, and another perfect 6-0 record in MAC Commonwealth play out of the No. 1 spot in her sophomore season of 2017-18. Trifoi went 12-2 in dual matches and made it back to the MAC Tournament Semifinals for the second straight year.

In the classroom, Trifoi carries a 3.98 GPA as a biology major. Trifoi has been named to the MAC Spring Academic Honor Roll three times, and twice to the All-MAC Women’s Tennis Academic team.