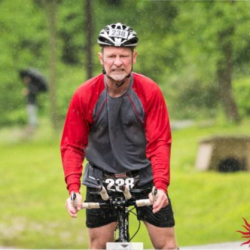 As most people are trying to find their way, Brian Vulgaris has his marching orders. Brian works in the Bureau of Procurement for the State of Pennsylvania. He’s putting in 12 hours a day trying to find the Personal Protective Equipment (PPE) to keep everyone safe.  Vendors who have supplied the state with PPE for years are now unable to deliver the quantities he’s tasked with finding so he’s finding new vendors, vetting them, and helping them through the process to get verified in the State’s system.

His military training prepared him for his vital role. “I was in the Marines, ’83 – ’87,” said Brian. “Second Lieutenant, Supply Officer. It was peacetime, not much going on. The Marine Corps connection is actually what attracted me to Chris [Kaag, USMC] and the IM ABLE Foundation.  This was probably prior to the inaugural Got the Nerve? Triathlon (GTN) in 2004.  I had been running some marathons up to that point. The Marine Corps Marathon was October every year. I’ve done it six times. Training for the marathons in July, August, that was brutal. It’s not supposed to be easy, it’s supposed to be hard. You don’t think you can go any more, but you dig down deep and find it, you get the endorphins. After doing all the training, the physical part is easy. The hard part is the mental part. Your mind starts to play tricks on you. You start to think about how you can quit, no one will know.”

“There’s no question,” Brian answered when asked if his military training prepared him mentally for endurance races. “It’s a chicken or egg. You have to have a certain amount of toughness to go through that, but that helps you to develop the instincts. Some go in there and don’t even know what they have until they dig deep and find the resolve to push through the adversity.”

Grit has been a part of Brian’s life as far back as he can remember.  “I played football back in school just like Chris. We went through some tough s**t back then. It’s an aggressive natured sport; it’s almost like running a triathlon, marathon, or basic training. It weeds out the quitters. They try to find out who the quitters are before game day. They prepare you mentally, physically. You have to study, know, your role, your responsibility. It’s not about you, it’s about the guy on your right, the guy on your left. It’s about the team.”

Brian recognizes the sacrifices made by his wife, Ann, makes for him to train for endurance races. “Training can be very lonely, very selfish,” said Brian. “You can try to wing it but if you want to be good at something you have to practice, you have to put in the time. You’re at competition with yourself. I’ll tell you what, there were times Ann had to tell me that I was obsessed, that I had to back off. There’s no playbook for it, you have to find a balance. When I went on my long runs, she was right there with me on a bike, every step of the way with a backpack full of hydration items.”

Back in 2004, Brian saw an advertisement for the first GTN Triathlon in the local newspaper and thought that it would be a good cross training opportunity. “I like everything it stands for. Chris’s story was inspirational to me and I just wanted to support it. I’ve been involved every year. The only year I didn’t compete I had heart bypass 2 months before.” 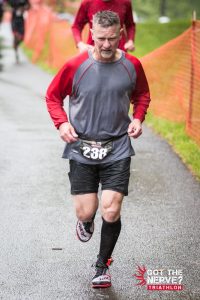 “It was the fall of 2015; I was doing my normal routine. I noticed a weird sensation about ½ mile into a run. I wrote it off as getting older, not enough sleep, etc. I went to the doctor, had an EKG, everything looked fine but the doctor suggested a stress test. Turns out there was a part where there was some kind of blockage. Where it was located there was an intersection of two arteries so they had to go in and do a bypass. There’s no question being in shape helped me recover a lot faster but I couldn’t do GTN that year. I was already signed up so I donated my fee and just showed up to volunteer.”

“I think the whole mission of what IM ABLE stands for is number one. It’s very satisfying to me. It puts me in my place. Knowing that there are bigger crosses to bear gives me a sense of responsibility. If they’re out there doing this, the least I can do is my part to help them reach their goals. Every year, it’s funny, every year weather-wise it usually turns out to really nice. A couple years ago it wasn’t. the morning of the race, I had my window open and you can hear the rain pouring down. I asked myself, ‘why do I spend $100 to do this?’  It’s for the IM ABLE Foundation. It’s not supposed to be easy. The least I can do is spend two hours in the rain racing. At least I get to.”

IM ABLE Founder and Executive Director was a healthy, active US Marine at 21 when he was diagnosed with Adrenomyeloneuropathy, a degenerative nerve disorder that eventually took his ability to walk. “Chris could have folded it up after it happened,” said Brian, “but he didn’t. If he can continue to go on, I can. We just know each other through the race but he’s a Marine, I’m a Marine, and we all have the source or unspoken brotherhood. That’s what got me going in the first place and what keeps me going now.”

“I’ve gotten a lot of my friends and family members involved in Got the Nerve? Triathlon, probably a half dozen or so. Everyone that has done it has loved it. I’m going to go out there today and I’m going to bike the course and run it. I can’t swim because the lake is drained but I’ve asked my friends and family to sponsor me and donate to the Foundation. I’m having some fun with it and will give whoever gives the most a gift card to their favorite restaurant. I’m glad to help. It’s a great organization and Chris really inspires me to get out there and do my part.”

For More Stories and Information about IM Able, CLICK HERE.