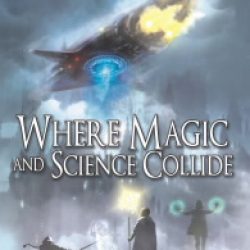 Joseph J. Swope, a Berks County author, has published Where Magic and Science Collide, a fantasy/science fiction novel scheduled to be released July 9, 2020 by Black Rose Writing. This is Swope’s fourth book.

Where Magic and Science Collide fuses elements of both fantasy and science fiction into a single work. The novel focuses on the distant world of Ambrasian, where wizards and enchantments work freely in a medieval world. Just as war breaks out on the planet, an intergalactic ship arrives in orbit to divert a killer asteroid heading toward the planet – only to find no scientific explanation for the events observed on the surface.

Where Magic and Science Collide explores the dichotomy of two civilizations – one fully immersed in a world of magic and the other driven by technological innovation.

“I have been a lifelong fan of the fantasy and science fiction genres,” Swope said. “I grew up reading J.R.R. Tolkien and Isaac Asimov, among many others. The unique part of this book is that it merges both styles into a single narrative.”

Prior to the official July 9 publication date, Where Magic and Science Collide is available  online at Black Rose Writing at https://www.blackrosewriting.com/scififantasy/wheremagicandsciencecollide. Readers may use the promo code PREORDER2020 to receive a 15% discount.

In addition, the novel is available at major online booksellers, including:

Additional information about Where Magic and Science Collide and author Joseph Swope is available at www.facebook.com/jswope58.