Back in January, I had thought about doing a city of Reading Big Year Bird Count but didn’t know whether I wanted to commit myself to such an extensive undertaking.

I had a precedent.

In 2004 I undertook the project with fellow birder Ken Lebo as my coach and found 131 species.

I didn’t think I could top that one, especially knowing the time commitment it took to accomplish – three or four hours a day during the peak seasons.

Plus I wouldn’t have my former coach as Ken and his family moved to Ohio last year.

On a chilly Sunday afternoon, I went for a walk at Angelica Creek Park and decided that if I found a good bird, I would do the count.

As if on cue as I looked up the Angelica Creek, a Winter Wren popped up and flitted among the underbrush.

Even though the coronavirus lockdown has negatively impacted all of our lives, it has given me the time to pursue the Reading count, abiding by all the social distancing requirements.

And it will give all of us an opportunity to slow down and watch nature unfold for us as we navigate this pandemic.

Reading is blessed with a variety of habitats that support bird life – from the Schuylkill River through Penn Square up to the top of Mount Penn at the Pagoda.

The Schuylkill River Trail through the city is a productive walk from Heritage Park to Stonecliff.

The trail between the Penn Street and Buttonwood Street bridges was a particularly surprising spot early in the spring as it yielded at least seven pairs of Wood Ducks, two Buffleheads, several Common Mergansers, a dozen Double-crested Cormorants and a Pied-billed Grebe along with Mallards and Black Ducks.

Penn Square is the home turf of the downtown Reading Peregrine Falcons, and we can look for a falcon perched atop the cross of Christ Episcopal Church at Fifth and Court streets.

Duryea Drive to the Pagoda offers a variety of bird life from migrating warblers to nesting forest dwellers like Wood Thrush, Veery and the abundant Rufous-sided Towhee.

The Bridle Path below the Pagoda has been a favorite haunt for Hermit Thrushes in the early spring and is home to a number of woodpecker species including Downy, Hairy and Red-bellied woodpeckers along with Northern Flickers.  We can also see or hear one of the most spectacular birds of the woodlands – the Pileated Woodpecker.

Skyline Drive from the Pagoda to Drenkel Field was a warbler hot spot in the spring and also produced Rose-breasted Grosbeak and Great-crested Flycatcher against a chorus of Gray Catbirds.

The same area will be a good place to view migrating raptors in the fall and will once again host warblers on their journey south.

At any place in the city we can look up and find turkey and black vultures riding the thermals or Red-tailed Hawks soaring.

A walk up the Rose Valley Creek from Pendora Park through Mineral Spring Park to Egelman Park is always good for bird life.

Occasionally, we may witness a  bird drama unfold.

On April 23, I watched on the Schuylkill River near Fritz’s Island as an immature Bald Eagle – perhaps a second-year bird- swooped down on a small raft of Canada geese with talons extended. The geese and a pair of mallards tightened up and flapped their wings to keep the eagle at bay.

The eagle made at least two passes over the raft before flying up to a sycamore, undoubtedly frustrated by its failure in the hunt.

About fifteen minutes later while walking along the trail, I saw both the immature and an adult Bald Eagle fly off together up the river.

It wasn’t a bird that fascinated me on March 9, but a nest.

Along the river, I found an old Common Raven’s nest in the girders underneath the railroad bridge north of the Buttonwood Street Bridge.

The presence of Ravens in the city is a remarkable occurrence, but nesting Ravens is even moreso.

A pair nested five years ago under a similar bridge in the city, but this one was more recent although abandoned.

I saw and heard a Raven fly over the river trail and have seen and heard Ravens on Mount Penn and in east Reading.

It can be as easy as looking up.

Or looking out a window.

Right now, city residents can attract birds to their backyards by simply putting water out for them.

We have a birdbath in our east Reading yard that has attracted Catbirds and House Finches.

It’s always fascinating to walk out the front door and listen for the neighborhood birds first thing in the morning.

And we can all enjoy the aerial acrobatics of the Chimney Swifts that make Reading their summer homes.

As of the end of May, I’ve found 101 species of birds in the city, which I list below.

I wonder what bird surprises the city will give me throughout the rest of the year. 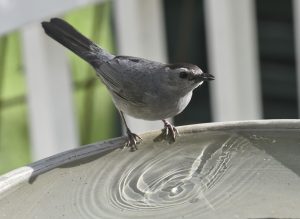 A gray catbird takes a sip from a birdbath in east Reading.