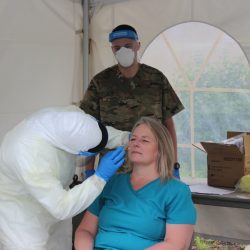 Photo | Staff Sgt. Kursty Campbell (Left) and Pfc. Ryan Whispell (Center) test a staff member at Kendal-Crosslands Nursing Home in Kennett Square, Pa., on May 26, 2020. Under guidance from the Pennsylvania Department of Health, and closely monitored by CDC officials, Pennsylvania National Guard members with Task Force Iroquois, launched a Point Prevalence Sampling Strike Team at Kendal-Crosslands. The mission is designed to identify possible risks of exposure to COVID-19 by testing the entire staff and all residents of the facility. This is part of a series pilot program that will reach out across the state. (Photo by Master Sgt. George Roach)

The sampling is being conducted at the direction of the Pennsylvania Department of Health (DoH) in order to provide logistics, planning and personnel to test all residents and staff at identified facilities for COVID-19 infection.

The DoH identified a need for increased testing of residents in long-term care facilities, many of which lack the staff or resources to comprehensively test. The Pa. Guard is able to provide personnel, many medically trained, to fill this gap.

“Nursing homes have been the epicenter of the COVID-19 crisis, because they include one of the most at-risk demographics in a community living environment,” said Maj. Matthew Gabler, the medical operations officer with the Pa. Guard’s Military Medical Planning Team. “Increased testing is intended to provide better data to understand the problem in order to implement better, targeted infection control measures to protect Pennsylvania’s most vulnerable citizens.”

According to Gabler, when the DoH identifies a facility to test, the first step is for the MMPT to schedule a site survey, which enables a military medical provider partnered with a civilian representative from DoH to validate the need and ensure conditions are suitable for the mission.

Once the mission is assigned to a PTF, the task force works directly with the facility to schedule the PPST’s arrival time, Gabler said.

“Based on availability of Guard personnel and the facility’s schedule, the time from site survey to mission start can be as little as 3-5 days,” he said.

The Pennsylvania National Guard’s domestic response forces are coordinated through three regional and two functional PTFs; North, South, West, Support, and Aviation. PTF-North and PTF-West each have one point prevalence sampling team of approximately 12 members, while PTF-South, in south-central Pennsylvania and the populous Philadelphia region, has two teams.

“We’re testing every patient and every employee in the facility, and we’re doing it in an efficient manner,” said Air Force Capt. Sondra Mendelsohn, a medical officer and physician with the 111th Attack Wing. “We’re getting in and out in a day or so and getting these people some answers so I think that’s been really helpful for them and a big accomplishment for us.”

Mendelsohn and her team conducted testing at Hickory House Nursing Home in Honey Brook, Pa., on May 22, one of the PPST’s first missions. The first mission took place at Gino Merli Veterans’ Center May 18 before expanding to civilian facilities. So far, the Pa. Guard has conducted point prevalence sampling at seven locations and has 2 scheduled.

“We’re super passionate about what we’re doing here,” said Pfc. Roland McClune, who is helping to perform the tests. “We understand these are people’s parents, grandparents, aunts and uncles, so we want to treat them like we would treat our own.”