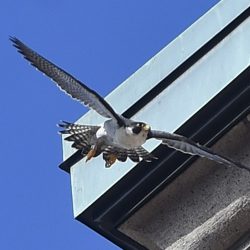 In a normal year, Pennsylvania Game Commission biologists would trek to Reading during the third week of May with a cadre of volunteer helpers and climb out to our downtown Reading Peregrine Falcon nest site.

In a normal year, they would retrieve the birds from the nest, place metal Fish and Wildlife Service numerical bands on their talons along with colored bands for observers to distinguish the individual young through binoculars or scopes at a distance.

In a normal year, they would carefully examine the birds, dusting them to rid them of parasites and measuring them to gauge their health and development.

And most importantly, they would normally check the nestlings for a deadly disease that has plagued the Reading peregrine young since at least 2010.

Well, we all know this isn’t a normal year.

Because of the COVID-19 restrictions and social distancing requirements, the game commission has suspended the Peregrine Falcon banding program throughout Pennsylvania.

In Reading, our downtown falcons began incubating four eggs on March 22, and the birds hatched around April 25, according to the game commission.

This year marks the 14th nesting season for the Reading falcons.

Every year since 2010, the Reading peregrine young have been infected with trichomonaisis, an often fatal respiratory disease to which the adults are immune but the young are highly susceptible.

The disease is widespread in the Reading pigeon population, which is a prey species for the falcons.

Trichomonaisis is spread to the young falcons from being fed the infected prey.

According to the game commission, the protozoa attack the digestive tract of the birds, creating cheese-like masses, interfering with eating and drinking.

The birds are unable to swallow and become emaciated.

Often the falcons will die of starvation or suffocate due to the lesions in the mouth blocking the trachea. 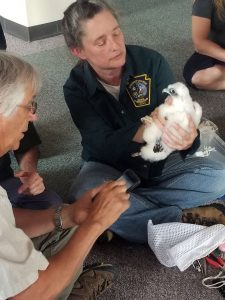 In the 2010 nest, three of the birds died from trichomonaisis.

Since then, the biologists have been careful about early detection and treatment of the disease.

During the nesting in 2013, all four of the young were infected, and each year since, trichomonaisis has been detected in the young.

The biologists administer antibiotics immediately or if the disease has accelerated, take the afflicted birds to Red Creek Wildlife Center in Schuylkill County for treatment and rehabilitation.

They all became healthy and successfully fledged.

The young falcons leave the nest during the first week of June.

If they are infected, they will become weak and unable to fly well, resulting in their grounding, usually in the center city area.

If grounded, the birds must be retrieved immediately and taken to Red Creek for treatment.

Peggy Hentz, director of Red Creek, offers advice on how to capture the grounded birds harmlessly.

“The safest way to capture a falcon is the box-over method,” Peggy said.  “Place a box over the bird and slide a piece of cardboard, board, or the lid under the box. Tape or tie them together and transport.”

If a box isn’t available, she urges rescuers to be creative.

“Any suitable container can be used,” she said. “Plastic storage tubs, even garbage cans can be used with this method. Make sure to allow for ventilation.”

This is the safest method for the rescuer because the bird isn’t handled, and it’s least stressful for the falcon because it was never touched.

The box-over method is preferred. However, if that’s not possible, the bird may be hand caught with a blanket.

“Raptors offer an additional challenge to capture because they use both their feet and beaks for protection,” Peggy said. “The beaks are curved and sharp, designed for tearing flesh. A bite from a raptor can inflict a severe wound, yet the feet and talons are their primary weapons. The talons can pack several hundred pounds per square inch of sharp puncture strength.”

Even when sick or injured, raptors can fight fiercely, so they must be handled carefully to prevent further injury.

“Every precaution must be taken to avoid feather damage through handling, since feathers must be in top condition for them to survive once released,” she said. “Covering a raptor with a blanket will quiet them quickly. Hawks especially become calm in the dark. This can prevent escape while minimizing further damage, giving you a chance to get better grip on the bird.”

And she warns, transport it in a box or plastic tote –  never in a wire cage, which can damage feathers.

Red Creek is open every day from 9 a.m. to 7 p.m. and has an after-hours drop off shed at the clinic at 300 Moon Drive, Schuylkill Haven.