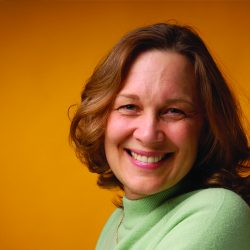 The Annadora Vesper Shirk Award for Faculty Scholarship recognizes a faculty member who best exemplifies a commitment to scholarship or creativity, especially as it pertains to a specialized and recent body of work. This year’s recipient, Paula Trimpey, M.F.A., is both accomplished and prolific in her area of scholarship and creativity as a costume designer and technologist at Albright College.

From analyzing scripts and conducting historical research to designing and producing costumes, Trimpey’s work as an associate professor of theatre and fashion, has played an essential role in visually telling the stories of award-winning plays. Her creations have appeared on a variety of stages, from the Domino Players’ productions to the Utah Shakespeare Festival, where she has developed her design and technological prowess for some 33 years.

In the last three years alone, she has done both solo construction and supervised student construction of over 190 costumes consisting of over 900 individual costume pieces. While at Albright, she has frequently collaborated with students on ACRE projects, most recently on the research, design and construction of a classical ballet tutu.