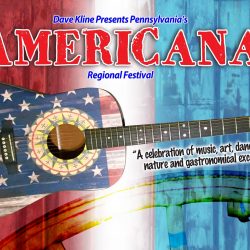 Thousands of views, shares, combined likes; Your Pennsylvania’s Americana Region Festival is chugging right along! The experience continues through June 30.

You can experience the festival live and explore past performances on the Americana Fest Facebook Page. Americana Fest in Berks County, Pennsylvania’s Americana Region, is an umbrella festival for the community and visitors, presenting a celebration of music, art, dance, culture, history, craftsmanship and gastronomical excellence.

Pennsylvania’s Americana Region Festival is raising money through donations to share with affiliate music, arts, history and teaching organizations within our home region of Reading and Berks County, PA. COVID 19 has greatly damaged the ability of our regional musicians, artists and presenters to earn a living and to share their talent with public groups as in the past.  The associated fundraising effort is called Pennsylvania’s Americana Region Festival Healing Arts Fund and can be found online at https://www.facebook.com/donate/1271093436428045/?fundraiser_source=external_url

Weds, 6/3, 6:30 to 7:30pm – A one hour lesson on how to play Flamenco and Rhumba nylon-stringed guitar with Jason Hochman, founder of the New York Guitar Academy, live-streamed from New York.

Thursday, June 4, 10am – Yocum Institute presents another in their fest series of how to appreciate regional works of art.

9pm – The first-ever Lyons Fiddle Fest grand champion, Travis “The Mad Fiddler” Wetzel, who now has performed on Nashville’s Grand Ole Opry many times, comes home with a one-hour livestream concert from his home in Tennessee.

4:30pm – Under the direction of guest conductor Terell Staffordshire, The Berks High School All-Star Band opened for the United States Air Force Rhythm in Blues Jazz Ensemble at the Double Tree by Hilton in Reading for this concert presentation.

5 to 6pm – Now famous in New York City due to numerous live television appearances, The Quarantined Quartet, a family of four from New York’s Guitar Academy, will perform a one-hour livestream concert of flamenco and rhumba Guitar.

6pm – The Noecker Brothers, three brothers taking music lessons at Meadowood Music, Blandon, rathe than forego their moment to demonstrate what they’ve learned this year, will perform their annual student recital for us here at the fest.

6:10pm – Al Chez & The Brothers of Funk Bog Band concert.  In 2017, the Berks Arts Council presented the Reading Buccaneers Drum & Bugle Corp with the prestigious Pagoda Award.  Al Chez, former member of the David Letterman Late Show Band, has performed with the Bucs and maintains a close connection with them.  Chez and his dynamic band were the perfect choice to perform during the BAC presentation which was filmed live.

6pm – We travel to Robesonia’s Ardounie Dairy Farm and get a how-to hand milk a dairy cow demonstration. Agriculture is a top industry in our region.

9pm – Dave Kline takes us on a Tour de Peppers and Eggplants at the Temple Greenhouse.

9:15pm – The ever-popular Musical Martin Family, from Newmanstown, perform a backyard concert that you won’t want to miss!

7pm – Fest cast member, The Yodeling Chicken does its thing.

5 to 6pm – Grammy Award winning David Cullen offers the second in a series of livestream guitar lessons during our fest.

5 to 6pm – Grammy Award winning David Cullen offers the third in a series of livestream guitar lessons during our fest.

6 to 6:30pm – Radio personality Dan Neubert presents “The Happy Half-Hour” show, during which he’ll be sampling 15 to 30 local craft beers and offering flash-thought options about each brew.

6:30 pm – We return to Robesonia’s Ardounie Dairy Farm and get an agricultural education about how-to artificially inseminate a milk cow from the one of the region’s top insemination experts Austin Milligan.

7pm – The ever-popular Musical Martin Family from Newmanstown, perform a backyard concert that you won’t want to miss!

Note:  Schedule subject to change with additions and deletions.