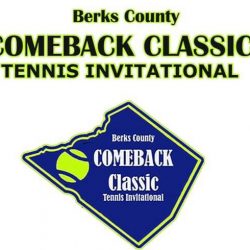 Due to rain and severe weather throughout Berks County on Friday June 5th, the Berks County Comeback Classic will now start Saturday June 6th at 10am. Preliminary round robin group play for the 3 Round Robin Groups of 4 players will be played Saturday June 6th with the top 2 players from each of the four Round Robin Groups advancing to the second days of play on Sunday June 7th with Final Round Coverage slated for 11am, 12noon & 1pm on Sunday. The Championship Final is scheduled for 3pm Sunday.

Please see NEW SATURDAY SCHEDULE for the NEW schedule of play when each group will be playing starting Saturday June 6th at 10am.

All matches will be shown LIVE on the Small Player Big Play App throughout the invitational event with commentary by Berks County Tennis Talks’ Ryan Knarr and Don Hutchison.

Complete streaming details of HOW TO LIVE STREAM can be found here.

Tennis returns to Pennsylvania and the northeastern United States utilizing a safe (non-social gathering), live streamed (no spectators) Invitational event called the “Comeback Classic at a 2 court private location in Berks County. The invite only prize money invitational will have the regions 12 best men’s players in round robin groups of only 4 players on site at one time (2 players per court), following all safety protocol and social distancing guidelines.

Only 4 players and 2 essential personnel will be at site location at once.

All the action will be streamed LIVE on the smartphone app: “Small Player Big Play” for $1/each day. All tournament proceeds benefit youth tennis in Berks County.