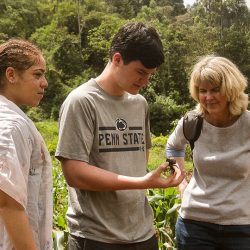 For the last decade, Dr. Janelle Larson has packed her bags after Penn State Berks’ spring commencement and traveled to Kenya. She does not make this journey for the purpose of a vacation; rather she has led a University-wide global outreach program – Penn State’s collaboration with the Children and Youth Empowerment Centre (CYEC) in Nyeri, Kenya. The program was recently recognized by the Penn State Office of Global Programs with their Outstanding Program Award for the positive impact it has made on vulnerable youth in Kenya and for the unique educational opportunity it offers Penn State students.

Approximately 100 Penn State students University-wide, including several student groups from Penn State Berks, have studied and worked on community development projects identified by staff at the CYEC over the last ten years. The program has touched more than 50 former street-dwelling youth served by the CYEC, which provides residential care and education for youth who must then transition to independent living.

The collaboration between the Centre and the University began when Paul Maina, founder and director of the CYEC, turned to Larson, an old friend at Penn State. Maina and Larson were students together at the University of Oxford, where both studied as Rhodes Scholars.

Maina was seeking the University’s expertise to help address several gaps in the care and rehabilitation of former street-dwelling children served by the innovative school he established in 2006, including training the youth in technological and entrepreneurial skills to support themselves when they leave the CYEC.

Larson, associate professor of agricultural economics, eagerly joined the initiative in 2008. In an interview the following year she stated, “The problems of street-dwelling children and youth are emblematic of issues in the larger society–poverty, family break-down, and disease. Solutions identified and developed for this population can be expanded to the larger society.”

More than ten years later, the program has yielded real-world outcomes with lasting impact, including initiatives and programming related to food production, youth development and entrepreneurship. Several businesses have been founded as a result of small business and entrepreneurship workshops and other support offered by the CYEC.

Through the course titled “Issues in Economic, Community and Agricultural Development in Kenya,” co-taught with Dr. Sjoerd Duiker, students learn about Kenyan history, culture and socio-economic conditions, as well as theories of community development before traveling to Kenya in May. In 2019, the students worked on two projects: one to develop a prototype landfill and another to facilitate an assessment of food security in neighborhoods where the CYEC works. 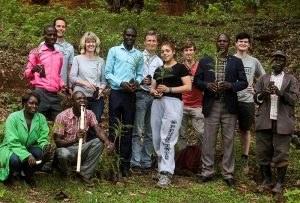 According to Larson, Nyeri, like most communities in Kenya, lacks a safe way to handle its waste. Two youth volunteers at the CYEC, Bonny and Kiki, have been working to develop and commercialize ‘waste to value’ initiatives including making charcoal briquettes from waste and recycling other materials. When the local municipality decided to build a new landfill, Bonny and Kiki wanted to ensure it would be safe, taking into consideration air and water quality in both the design and management of the site.

Penn State students researched the design of landfills in resource-poor environments and worked with Bonnie and Kiki to design and build a prototype landfill at the current dumpsite. Their work caught the attention of national media – you can view the news clip here, and the county government is looking at the prototype as a model for a new landfill.

Food insecurity is another challenge in the area, and it potentially contributes to children and youth ending up on the streets. However there is no real understanding of the incidence of or risk factors for food insecurity. The CYEC asked Penn State students to develop a survey instrument and methodology to help them identify how prevalent (and deep) food insecurity is and to identify who is at greatest risk of lacking adequate food. The students developed an instrument that includes the Food Insecurity Experience Scale (FIES), as well as general information on household demographics and dietary diversity. The FIES is used globally and identifies mild, moderate or severe levels of food insecurity. Penn State students worked with staff at the CYEC to ensure that the survey was culturally appropriate and to train the enumerators. Findings from the survey helps the Centre target their outreach initiatives to neighborhoods most at-risk.

“Over the last ten years, there has been a lot of growth and change institutionally,” commented Larson. “We work closely with the staff at the CYEC and place a lot of emphasis on development with youth on entrepreneurship programs. Youth have formed a cooperative, accessed government financing, and attended training programs.”

One example of an entrepreneurial endeavor that grew from the Penn State-CYEC collaboration is a hay-making operation, which has been in business for the last seven years. As part of the cooperative, up to three youths from the CYEC cut grass, bale it, and help to sell it. They also construct hay balers and have trained other youth within the cooperative and in other programs for vulnerable youth in Kenya and Uganda.

Through Larson’s efforts, the University became involved in helping to support the CYEC through a variety of initiatives, including designing and building a Zawadi eco-village with the goal of providing a launch pad for youth as they leave the CYEC. (“Zawadi” is Swahili for “gift.” The name was chosen to acknowledge that each child has a gift to offer the world.)

Since the young people of the CYEC do not have homes to return to when they complete their education, they are at high risk for returning to the streets. The Zawadi village includes agricultural production and other entrepreneurial activities to provide income and employment for the youth.

“The CYEC is more than just a children’s home; it is a convergence point for people of different backgrounds to discuss, research, experiment, and consolidate knowledge concerning the empowerment and development of young people,” explains Larson. “The staff at the CYEC are intentional about focusing on developing the whole person and finding sustainable solutions to some of society’s most intractable problems. They provide a rewarding setting for Penn State faculty, staff, and students to integrate teaching, research, and outreach.”

When asked what makes the partnership between Penn State and the CYEC different, Larson explains that it is very collaborative. “Often in service-learning, people come in and think they have all the answers. In this case, the CYEC sets the curriculum. That makes it more meaningful. It is a real collaboration and a real partnership.”

Global Programs annual awards recognize the outstanding contributions of individuals and academic programs at Penn State who have helped to advance the University’s global engagement goals.  For more information on the awards, contact Jennifer Theiss at [email protected]