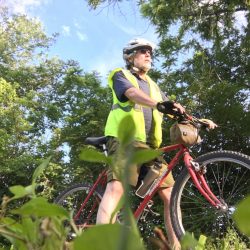 Photo: Bill Uhrich realizes at this moment that he had outridden his ability to get back home.

When the thief crept onto our east Reading porch that early spring night nine years ago and stole my chained and locked mountain bike, he also robbed me of my bicycling soul.

I had put extra expense and effort into customizing the bike to fit my needs perfectly, and after it was gone, my enthusiasm for biking went with it.

But this year after a springtime of coronavirus isolation-induced long walks around Reading and on Mount Penn, I had a yearning to explore farther.

I had a spare mountain bike in the basement that I had used back then when the weather looked like rain, but it had been sidelined by a stripped crank.

With recent news stories about the unavailability of bikes in shops and the long waits for repairs, I decided to tinker with the bike to get it in shape – and hopefully, to get me back in shape.

I had let it sit in the basement along with Ol’ Fuj’, a road bike I bought myself for my 30th birthday in 1984 after the Swedish 10-speed bike I rode throughout college and my years as a teacher was taken from our garage when we lived in Kutztown.

I suppose I didn’t learn my lesson that first time.

Anyway, it is true that one can get anything on the internet, and it didn’t take long for me to find an exact match for the crankset on my 30-year-old mountain bike.

I also needed a crank-puller tool, again, easily found on the web.

YouTube is also a good friend for do-it-yourself bike tuneups.

Having lain fallow in the basement all those years, the bike needed some intense cleanup.

Simple Green did the trick for most of the frame and did a good job degreasing the chain, gear cogs and derailleurs.

Corrosion came off quickly with some 0000 steel wool and oil.

I also ordered on the web two new tires and tubes just in case but was surprised that when I inflated the tires, the tubes held and the tires hadn’t suffered from any dry rot.

I had gone to riding mountain bikes because their wide tires and more forgiving suspension worked better on the rough streets of Reading than the skinny tires on Ol’ Fuj.

Luckily, some new road projects in the city included the repaving of Constitution Boulevard in City Park, so I got Ol’ Fuj up and running to do laps in the park while waiting for my bike parts to arrive, thinking that it would get me in shape to ride the Schuylkill River Trail when I got my mountain bike together.

At my biking peak a decade ago, I had done two century rides (100 miles) and had also explored the Schuylkill River Trail from Pottstown to Blue Marsh.  I had ridden the back roads through Fleetwood and Lyons up to Hunsicker’s Grove in Longswamp Township.  The Oley Valley was just a skip and a jump away.

My daily routine had been a dawn ride from our home to Muhlenberg Township and its rail trail to Temple, finishing with a jaunt up Duryea Drive to the Pagoda.

I begun to have delusions of grandeur as I lapped City Park on Ol’ Fuj, and when I completed the repairs on my bike, I set off for the trail thinking Birdsboro would be a snap.

As I groaned past Gibraltar, I had the realization that I had outridden my ability to ride back.

When I finally wheezed the final uphill mile and a half back home, I did a pain roll call:

Incrementalism is definitely the way to go.

After a few days’ rest, I’ve begun riding to Gibraltar with the goal of Birdsboro in a week.

I won’t be cracking off century rides as I did a decade ago but will be happy to make it to Pottstown on the trail by the end of July.

And I’m keeping my bike in sight at all times.