By Commonwealth of PA - Governors Office 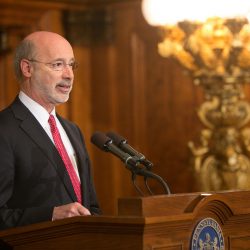 Governor Tom Wolf announced that since March 1, the population of those in state correctional facilities has been reduced by 3,471 individuals, the largest multiple-month decrease ever experienced by the Department of Corrections and one that likely helped the department reduce the number of COVID-19 cases in facilities.

“When COVID-19 arrived, the Pennsylvania Department of Corrections met the challenge of keeping the general public safe while protecting its inmate population from this easily transmissible disease,” Gov. Wolf said. “The department has been successful at keeping COVID-19 from spreading widely in the congregate settings of correctional facilities.”

In the three-plus months since COVID-19 was first identified in Pennsylvania, less than 1 percent of the state prison population has tested positive. Ultimately, the inmates inside state correctional institutions have proven so far to be more secure from COVID-19 than the general population, where the mortality rate is 90% higher than it is in the state’s correctional facilities as of today.

The population reduction includes furloughing paroled individuals from centers to home plans; working with the parole board to maximize parole releases; reviewing parole detainers for those in county jails and state prisons; expediting the release process for anyone with a pending approved home plan; reviewing and releasing inmates who are beyond their minimum sentences; and implementing the temporary reprieve program that has allowed Gov. Wolf to issue reprieves to 159 inmates during the pandemic.

These releases are in addition to preexisting criminal justice reform efforts that have reduced Pennsylvania’s prison population from 48,881 inmates when Gov. Wolf entered office at the beginning of January 2015 to 41,738 inmates today. That 7,143 decrease in population in under five years has allowed the state to reduce taxpayer costs by closing facilities while enabling more Pennsylvanians to resume their lives – all without an increase in the state’s crime rate.

“The Department of Corrections takes pride in its ability to keep inmates safe and will continue to prioritize health and wellness during the COVID-19 crisis,” DOC Sec. John Wetzel said. “We will continue to seek improvements in our criminal justice system that minimizes the number of incarcerated individuals while providing the highest degree of safety to every Pennsylvanian.”

Pennsylvania has taken a bipartisan approach to criminal justice reform and in recent years has: