How Are Americans Using Their Stimulus Payments? 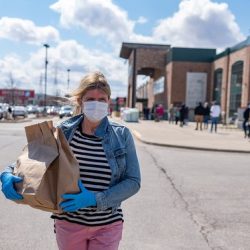 About 85.5% of respondents to the U.S. Census Bureau’s experimental Household Pulse Survey said they had received or expected someone in the household to receive an Economic Impact Payment or stimulus check.

The majority of adults in households that received a stimulus check from the federal government say they used it or planned to use most of it on household expenses.

According to the latest survey results released today, 15.7% used their stimulus check to pay off debt and 14.1% planned to mostly save it.

Who’s More Likely to Save Their Check?

Adults in households with incomes between $75,000 and $99,999 were more likely to use their stimulus payments to pay off debt or to add to savings, compared to households overall.

Over a third of adults in those households reported that they would use the money to pay off debt or add to savings.

In contrast, 87.6% of adults in households with incomes of $25,000 or less planned to use their stimulus payments to meet expenses.

How Are They Spending It?

A smaller share (8.1%) said they spent or would spend the stimulus on household goods like TVs, electronics, furniture, and appliances or on recreational goods like fitness equipment, toys and games.

These reports indicate the importance of the stimulus payments to help cover basic expenses such as housing and food.

What is the Household Pulse Survey?

The Census Bureau designed the Household Pulse Survey with input from other federal agency partners to collect and disseminate data in near real-time to provide vital insights into how American households are faring during the COVID-19 pandemic.

We collected the first round of data for the April 23-May 5 period.

Daniel Perez-Lopez is a survey statistician and Charles Adam Bee is an economist in the Census Bureau’s Social, Economic and Housing Statistics Division.