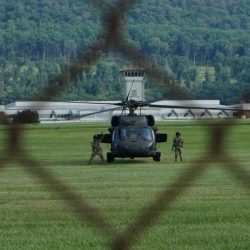 Soldiers from the 28th Expeditionary Combat Aviation Brigade depart from Fort Indiantown Gap, July 3, 2020, on the next step of their deployment to the Middle East. Photo by Sgt. 1st Class Matthew Keeler

Black Hawk helicopters and aircrews from the 28th Expeditionary Combat Aviation Brigade (ECAB) left Fort Indiantown Gap on July 3, 2020 and headed to their mobilization station to conduct final preparations for the brigade’s deployment to the Middle East.

In total about 900 Pennsylvania National Guard soldiers with the ECAB are deploying to the Middle East in support of U.S. Central Command (CENTCOM), although not all members left with the helicopters. The soldiers are based in Lebanon and Cambria counties.

In order to protect the health of the soldiers and families, Governor Wolf, Maj. Gen. Anthony Carrelli, Pennsylvania’s adjutant general and head of the Pennsylvania Department of Military and Veterans Affairs, and other senior leaders provided video messages last week in place of a traditional deployment ceremony.

The ECAB will deploy with 500 soldiers from other states to provide Army air operations including transport and medivac services in support of CENTCOM. The unit will head to Texas in July before an approximately nine-month tour of duty overseas.

“They have endured so much to get ready for this deployment but they are some of the finest, well-trained, resilient, professional soldiers that I have ever experienced in my 37 years as an enlisted soldier and officer,” said Col. Howard Lloyd, ECAB commander.