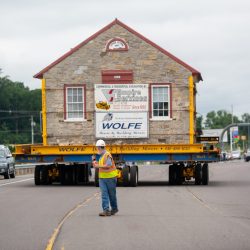 It has been a year of ups and downs for Jane Goetz, a Leesport resident and retired teacher who spearheaded an effort to save a 173-year-old, one-room schoolhouse from being demolished to make room for an industrial park in Bern Township.

Following a series of setbacks and obstacles, the schoolhouse on Tuesday was moved 1.5 miles from its former location at Van Reed and Leiscz’s Bridge Roads to the Berks County Heritage Center, where The Friends of the Epler’s One Room Schoolhouse will renovate it to be used for educational demonstrations and events. Wolfe House & Building Movers, Upper Tulpehocken Township, conducted the move. 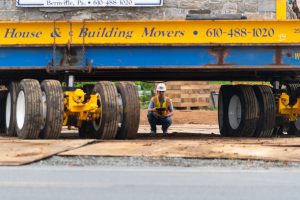 The building was taken on remote-controlled dollies along MacArthur Road to Route 183, across Route 183 and down Red Bridge Road to the Heritage Center, where it will reside next to The Distlefink, a work of Pennsylvania Dutch folk art. 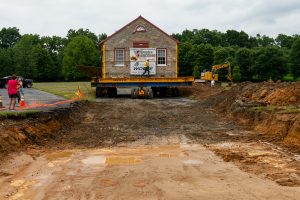 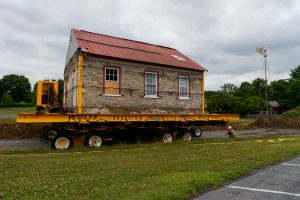 “This is just an awesome day,” said Goetz, chairperson of Friends of Epler’s said as she watched the structure being placed in its new location. “It has been a very long road to get here, but it was worth it. This is the best day ever.”

Spectators line the road as the movers make their slow, careful journey.

The journey began last July when Goetz drove by the schoolhouse and noticed that the Greater Berks Development Fund, which owned it, was having land cleared around the structure. She started making some calls and learned of the plan to have the schoolhouse demolished. A long-time teacher in the Hamburg School District and a lover of history, Goetz was appalled.

“I’ve lived in Leesport for 47 years and went past that schoolhouse all the time,” Goetz said. “It broke my heart to think about ripping it down.”

Goetz in August approached Ed Swoyer, president of the Greater Berks Development Fund, about the plan to destroy the building. Swoyer agreed to delay the demolition to give Goetz time to generate interest in saving the structure, which was built in 1847 and used as a school until 1931. It was later converted into a home.

“We were happy to work with Jane Goetz, the county commissioners and the Epler Friends group to help make this happen,” Swoyer said. “I’m glad it worked out the way it did.”

While Goetz appreciated the extra time granted by the Greater Berks Development Fund, she sensed her work had just begun.

“That was the first time we saved it, but it was by no means the end of the story,” Goetz said. 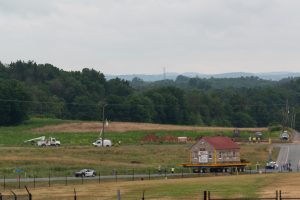 County Commissioners Step in to Help

The matter of the schoolhouse was next taken to Berks County Commissioner Kevin S. Barnhardt, who was supportive of the effort to save it. Goetz praised the commissioner for his ongoing help and support.

“Commissioner Barnhardt was with us since day one,” Goetz said. “We couldn’t have done this without his help.”

Barnhardt said the school is historically significant and well worth saving.

“I offer best wishes to Jane and the Epler Friends as they restore and recapture the original beauty and history of Epler’s Schoolhouse,” Barnhardt said.

Goetz spread the word about the plight of the school and in September about 30 supporters turned out for a meeting at the Heritage Center to discuss how they might save it. That group became the Friends of the Epler’s One Room Schoolhouse, which is a registered non-profit with 501 C3 status.

Swoyer had agreed that the Greater Berks Development Fund would pay half of the $211,000 cost of moving the school from its land to the Heritage Center. It was unclear, however, where the rest of the moving money would come from. The Friends group, supported by Barnhardt, appealed to the county commissioners to provide the money. Commissioner Christian Y. Leinbach and former Commissioner Mark C. Scott, however, opposed the spending.

Then, during a commissioner’s meeting in December, Scott changed his mind and voted to provide the funds.

“That was another great day,” Goetz recalled. “We were right up against our deadline for getting the money when Mark Scott voted yes. That’s the second time the schoolhouse was saved.”

That euphoria, however, was not to last.

Funds Withdrawn Due to Pandemic; Anonymous Donor Saves the Day

In late April, the commissioners told the Friends of the Epler’s One Room Schoolhouse the county would be unable to contribute money to fund the move. The money, they said, was now needed to fund essential services in the event of the COVID-19 pandemic that was badly straining the county’s budget.

“We have furloughed over 300 county employees, deferred plans for a $3 million agriculture center and moved $5 million in capital projects to the future,” Barnhardt said during an interview in April. “The $110,000 to $120,000 earmarked for the school had to be redirected for essential services.”

Beyond discouraged and facing a looming demolition deadline, the Friends took to fundraising in earnest. Appealing to various groups and businesses, they were able to raise $3,350 in one week, but remained far from their goal.

“I thought it was amazing that we could raise that much in a week, but it was nowhere near $110,000,” Goetz said. “We were starting to lose faith that we’d be able to save the school.”

And then, two days before the scheduled demolition of the building, Goetz received a phone call.

A Berks County resident who had been following the schoolhouse saga wanted to donate money to cover the other half of the moving fees. The donor wishes to remain anonymous.

“He said he wanted to do it in memory of his wife, who had been a teacher,” explained Goetz. “He said it was National Education Week and he really misses his wife, and he read the story in the paper and just felt that his wife was telling him to save that school. That was the third time it was saved.”

Barnhardt said he is thrilled the future of the schoolhouse finally is safe, and credited Goetz and the Friends for their perseverance.

“All the credit goes to Jane and her tenacity to pull together the Friends of Epler’s,” Barnhardt said. “Jane never gave up, even when it seemed like all hope was lost. And, to me, the anonymous donor that stepped forward just personifies the true meaning of community and the treasures we have right here in Berks County.”

Now in place at the Heritage Center, the schoolhouse will get loving care from the Friends of the Epler’s One Room Schoolhouse, which has already collected an array of items with which to furnish and decorate the school when renovations are complete. While Bonnie Schaeffer, treasurer of the Friends group, was ready on Tuesday for a rest, Goetz would hear nothing of it. 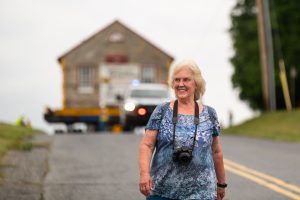 Jane Goetz walks proudly in front of the schoolhouse as it is moved to it’s new location.

How to help: The Friends of the Epler’s One Room Schoolhouse are looking for volunteers and donations of materials needed to renovate the school. Monetary donations also are welcome. If you are interested in joining the Friends group or getting involved in another way you can contact the organization on its Facebook page, “Epler’s Schoolhouse.” Donations can be sent to Epler’s One Room Schoolhouse, c/o Bonnie Schaeffer, 420 Crystal Rock Road, Temple, PA 19560. Schaeffer is treasurer of the Friends group. 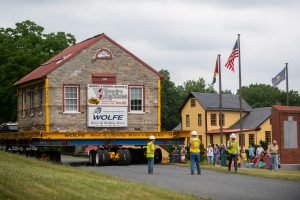