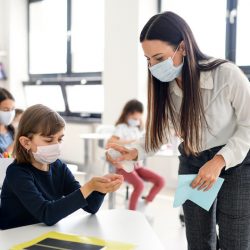 HARRISBURG, Pa. — Pennsylvania schools are scheduled to reopen on August 17, but teachers are concerned the planning and funding needed to reopen with the COVID pandemic still in progress simply aren’t there.

A recent analysis by school officials said it could cost the average size school district as much as $1.8 million to reopen all its buildings under new safety guidelines. But many school districts are already struggling to make ends meet.

Beth Yoder, president of the Pottstown Federation of Teachers, said rushing to reopen will put teachers at risk.

“This is a disaster in the making, going back to school without understanding what’s going to happen when you don’t have teachers because they are either quarantined or they’re sick, or they’re dead,” Yoder said.

The American Federation of Teachers has prepared a plan to safely reopen schools that begins with maintaining social distancing until new COVID cases decline for two weeks.

Yoder said the Pottstown School District was underfunded by more than $13 million before the pandemic. She noted reopening probably will rely on some level of remote instruction, but many students don’t have the technology to do that.

“That puts them even further behind in a virtual setting,” she said. “And when they do graduate, they don’t have as many tools in their toolbox because of the lack of funding.”

The HEROES Act, which passed in the U.S. House in May, would have provided more than $20 billion to Pennsylvania schools, but the bill has not cleared the Senate.

Yoder cautioned that teachers who have health conditions like heart disease or those who are cancer survivors will be especially at risk.

“We’re going to be requesting ADA accommodations in order to safely teach,” she said. “But if the district doesn’t get money from the HEROES Act, we’re not going to be able to implement much of anything.”

The American Federation of Teachers has said recovering from the pandemic will require expertise, planning and funding that makes strengthening communities a priority.