BECHTELSVILLE, PA. 7/26/20 –  All three features on Saturday, July 25 at Grandview Speedway were down-to-the-wire duals between the race winner and runner-up with close to 90 cars racing.

The T.P. Trailers Modified NASCAR Advanced Auto Parts 30-lap feature was a battle till the bitter end between Kevin Hirthler, as he became the first repeat winner in the Green Lane/Wm. Penn, Pioneer Pole Building No. 117, and defending point champion Duane Howard. 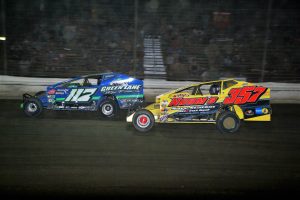 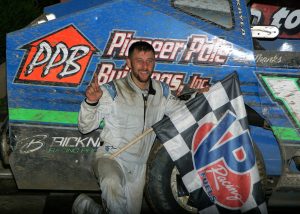 Kenny Bock took advantage to take over first in the 25-lap T.P. Truck Equipment NASCAR Sportsman feature when rookie racer Dakota Kohler went too high and hit the fourth turn wall with two laps remaining. Kohler was able to continue, but fell to third as Jesse Leiby scooted underneath for second to challenge the leader. Bock, who thanked his parents and crew for their support, was able to withstand Leiby’s moves to score his first career victory after trying so hard and leading on numerous occasions in the past to become the fifth different winner in the class this season. 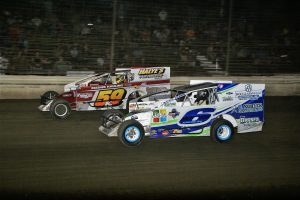 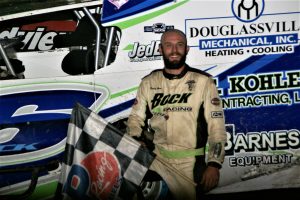 Eric Jennings ducked underneath leader Joe Biasi on the 21st lap of the 25-lap Winged Super Sportsman feature and held off Biasi’s late race challenges to go on to collect the win. 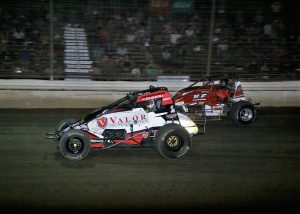 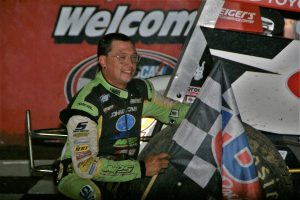 Providing the Modified and Sportsman feature winners met the necessary requirements, they received monetary awards from T.P. Trailers and a certificate from VP Fuels for product awards. The Dan’s Deli ½-way hoagie award recipients were Hirthler and Kohler. Jesse Leiby earned an extra bonus from the track for being the highest crate engine finisher.

Kenny Gilmore set the pace for the first lap of the Modified feature before Hirthler, who had a dismal 20th-place finish the previous week, put the Dave George power plant, which was the sportsman car he would run on occasions with his modified engine underneath the hood, into the lead.

Ryan Lilick stopped in the fourth turn on the eighth lap and the pack regrouped during the eighth lap yellow. Hirthler held his line when action resumed, but now he had to deal with Kressley, who was trying feverishly to get by him leaving no margin to error.

Back further in the pack trying to get to reel the front runners in were Gilmore, Haring and Howard.

Lapped cars later allowed Kressley and Howard to get on Hirthler’s bumper.

Fourth place runner Haring Jr. had his night end on the 23rd lap when he came to a halt in turn three for the second and final caution period. On the restart Hirthler chose the outside lane since his car was hooked up on the high lane and Howard had to deal with the inside trek. Hirthler was off and running on the restart. By this time last week’s feature winner and 2018 point champion Mike Gular joined the heated battle. Waiting in the wings for a slip up were Kressley and Rick Laubach.

Kressley, Danner, Gular and Gilmore won the heats. The consies were won by Manmiller and Ryan Lilick.

Bock took the early lead at the start of the Sportsman feature with pressure from Bryan Rhoads, Dakota Kohler, Derrick Smith and Dean Bachman.

It didn’t take Bock long to out distance himself while Kohler, Rhoads, Smith and Bachman tried to erase the margin.

Defending point champion Brad Brightbill spun in the second turn as his season misfortunes continued bringing out the ninth lap yellow. The restart was void when Ken Eckert Jr. hit the second turn wall. Bock led for three more laps after the restart before Kohler moved into first on the 12th circuit.

As the race progressed Kohler kept going higher getting close to the wall and with two laps remaining the inevitable occurred and he was into the fourth turn wall. He continued, but by this time Bock and Leiby were by him for first and second.

A first turn tangle between Lex Shive and Kyle Lilick set up a one-lap shoot-out. Bock knew who was behind him on the restart and didn’t hesitate when the race continued and went on to chalk up the triumph. Finishing a close second was Jesse Leiby with Kohler, third; Mark Kemmerer, fourth and Smith, fifth. Sixth through tenth were Brad Arnold, a feature race winner this year; Chris Esposito, Nate Brinker, John McGovern and Brian Hirthler.

Heats went to Rhoads, Kohler and Bock. The consi was won by Chris Esposito.

Brian held onto first until the eighth lap when Biasi passed him to become the new pacesetter.

While Biasi showed the way, Brian and Jennings put on quite the shuffle for second.

With five laps to go Jennings was second making his presence known to Biasi, who was running the high groove.

Coming off the fourth turn Jennings dove underneath Biasi to take over first on the 21st lap and stayed there until he pulled in victory lane. Chasing him across were Biasi, Steve Wilbur, Brian and Brett Periogo. Gutshall, Craig Perigo, Jason Failor, John Stehman and Michael Smith finished sixth through tenth.

Beasley and Biasi won the heats.

Next Saturday night, August 1st, one of the most popular events of the season will be presented. A large field of Modified racing talents will be on hand trying for the win in the $10,000 to win 50th Annual Forrest Rogers Memorial, a 50-lapper for Modifieds. In addition the Sportsman stocks will be part of the doubleheader show.

An added attraction will be the Acoustic Band featuring 1973 Freedom 76 winner Roger Knappenberger and his son Pete an auto racing radio personality. The band titled Maddie-Pearl will perform in the first turn pavilion from 5:30 p.m. to 6:30 p.m.

And as is the norm the folks from the Low Down and Dirty Radio show will be presenting their Meet & Greet at the main gate starting at 5 p.m.