GREENSBORO, N.C. – The Albright Lions baseball team was one of just 108 NCAA Division III programs to be honored with the American Baseball Coaches Association (ABCA) Team Academic Excellence Award, announced by the organization on Wednesday morning. To qualify, teams must surpass a combined 3.0 GPA on 4.0 scale for the entire 2019-20 academic year 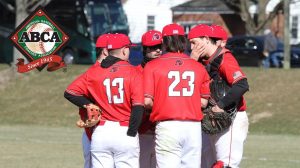 The Lions were one of five teams from the (Middle Atlantic Conference) MAC Commonwealth to make the list along with Hood, Stevenson, Widener and York. This is the third time in the last four years that Albright has made the cut.

“In light of the challenges faced by so many programs across the country, we are humbled to be able to honor a record number of teams for their outstanding academic achievements,” said ABCA Executive Director Craig Keilitz. “It is a testament to the leadership of our member coaches and the commitment of their student-athletes who persevered during an unprecedented academic year.”

As a team, the Lions tallied a 3.38 GPA for the spring semester. Five student-athletes on the team posted a 4.0 GPA in the semester as well. Albright baseball also saw 21 of its members named to the 2020 MAC Spring Academic Honor Roll earlier this month.