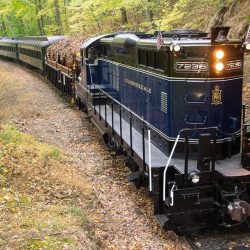 The Colebrookdale Railroad was recently nominated to USA Today’s 2020 10Best Readers’ Choice travel awards.  The public can vote once every 24-hours in the contest for America’s Best Scenic Train Ride now through August 17 at noon.

“We need the support of the community to vote for us and help us get to number 1!  By voting, you not only will help put the Colebrookdale Railroad on the map during these difficult times, but you are also recognizing all the hard work of the staff and volunteers at the railroad and give a great boost to Berks and Montgomery Counties,” said Nathaniel Guest, Executive Director of the Colebrookdale Railroad Preservation Trust.  The Trust is the non-profit restoring and operating the Civil War-era Colebrookdale line.

The public can vote by going to www.colebrookdalerailroad.com, through the Colebrookdale’s Facebook page, or directly at Vote for Colebrookdale Railroad