Be on the lookout, Berks, for the Western hummingbirds 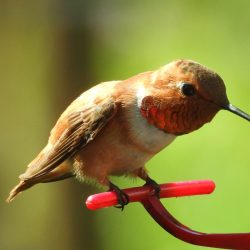 An early Rufous Hummingbird sighting in Knauers may lead to a banner fall.

A Rufous Hummingbird turned up at a Knauers feeder at the end of July for the earliest recorded sighting of a Western hummingbird species in Pennsylvania.  Photo by Mike Slater

Hummingbirds used to be so easy.

Throughout most of the 20th century, Berks County birders could look out at feeders in their yards and confidently identify any hummingbird as a Ruby-throated, since that was the only species of the 23 that occurred in North America that was found in the East.

By century’s end, that all changed.

Occasionally, Western species, primarily the hardy Rufous Hummingbird, were found at Pennsylvania feeders that backyard birders left up late in the fall.

These were written off as wandering vagrants.

By the late 1990s, Western hummingbird species that were once considered accidental became fall regulars.

The first recorded Berks sighting of a Rufous Hummingbird occurred during the fall of 1998 at Keim Orchards in Boyertown.  The bird was sighted at a feeder on Sept. 15 and was last seen on Dec. 31 when it probably migrated prior to a night of single-digit temperatures.

Clearly, a migration pattern for these hummingbirds had changed, aided in no small way by the proliferation of backyard hummingbird feeders and bird-friendly landscaping.

After the Boyertown hummingbird, Western species turned up regularly in Berks.  Invasion years include the fall of 2002 when seven Rufous Hummingbirds were recorded and 2012 when five were found in the county.

A first-state record Anna’s Hummingbird was found at a feeder in Shartlesville on Nov. 1, 2010, and became the first Western hummingbird in Pennsylvania to completely overwinter, leaving the following March 16.

An immature Calliope Hummingbird was found at a Robesonia feeder from Nov. 5 until Dec. 10, 2016.

But hummingbirds are still easy in Berks.

According to hummingbird specialist Sandy Lockerman of Harrisburg, the male Ruby-throated Hummingbirds will leave beginning in early August, followed by the females and immatures through mid-September.

By Oct. 1, all of the Rubythroats will have migrated.

For three days at the end of July, Mike and Jan Slater entertained at their hummingbird feeder in Knauers an adult male Rufous Hummingbird. 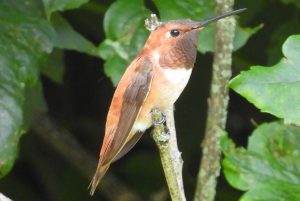 A Rufous Hummingbird perches in a bird-friendly backyard in Knauers.  Photo by Mike Slater

This occurrence is the earliest documented appearance of a Western hummingbird species in Pennsylvania.

Mike and Jan first saw the bird on July 29, and Sandy was able to capture and band it on July 31.

After it was banded, the bird zoomed off to the southeast and hasn’t been spotted since.

Jan and Mike are definitely doing something right in their bird-friendly home as this is the second time they have hosted a Rufous Hummingbird, the first occurred from Nov. 11 until Dec. 25, 2016.

Berks backyard birders should keep their hummingbird feeders up at least past Thanksgiving in hopes of attracting one of these Western wanderers.

And to keep up with sightings in the state, birders can go to Rob Protz’s comprehensive Pennsylvania hummingbird web page, which lists all the sightings of the Western hummingbirds by county at pahummers.tripod.com.

If the Slaters’ early Rufous is any indication, this fall may be a banner time for the rare Western hummingbirds in Berks.