Boyertown bear known as “Hal Bear-toia” returns to his creator

By Studio B Art Gallery 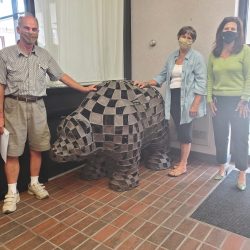 In a generous token of appreciation to the arts in Boyertown, Branch Manager VP Jamie Cascino of BB&T (Truist) Bank offered a donation from BB&T (Truist) to Studio B Art Gallery, and, after 15 years—almost to the day—on August 3, 2020, returned the Bear Fever bear known as “Hal Bear-toia” to his original home and his creator Val Bertoia.

“Donating Val’s payment to Studio B, Boyertown’s art center, in reclaiming his artwork is a win-win,” Cascino noted. “Hal” will be protected and cherished with his creator, and Studio B will benefit from Truist’s donation in these challenging times.”

“Hal,” a bronze and copper bear fashioned by Val Bertoia and Dave Plum of the Bertoia Studio, Bally, was originally sponsored by the TriCounty Chamber of Commerce and has resided in Boyertown, PA, since his debut in 2005. “Hal” was sold to National Penn Bank and later acquired by BB&T (Truist) Bank.

“Hal Bear-toia,” features a checkerboard pattern of welded brass and copper sculpted in the walking Bear Fever form. Bertoia, along with Dave Plum, sought to combine their assorted talents and to honor and commemorate Harry, Val’s father, the creator of the Bertoia Chair.

Harry is known as a noted sculptor, architectural designer, graphics artist, jewelry maker, and innovative, highly-respected 20th century artist. And so, inside “Hal” is a chair in the Bertoia design, that Harry developed for Knoll Associates in 1952.

Further details about the Bear Fever community art project can be found on the website: www.bearfever.org or by contacting Jane Stahl, [email protected]

About “Hal Beartoia” and the artists:

A chance encounter with Val Bertoia was one of Bear Fever’s luckiest moments. Jane Stahl, former Boyertown High School English teacher and Bear Fever’s originator, took a student in her Leadership 101 class on a walk through Bally, PA, in 2003 among assorted businesses hoping to inspire sponsorship for a Bally Shared Bear Fever Bear to add to the Bear Gallery.

“As we walked the street, I noticed the Bertoia Studio sign. While I knew of Bertoia’s work, I really didn’t know the studio existed in Bally,” shared Stahl.  “We walked in, hollered a bit for attention; and when we were not able to rouse any human form, I called the studio’s phone number and heard the phone ring downstairs and someone answer,” she added.

“We were soon joined by artist Melissa Strawser and Val Bertoia. Aisha and I explained the Bear Fever project, and Val was excited to be asked to join the project—not as a sponsor but an artist. We were ecstatic! And it wasn’t long before Melissa also expressed interest in doing a bear, volunteered her mother Barbara’s Strawser’s efforts, as well as Val’s sister Lesta. Bear Fever could now claim four Bertoia-related artists for Bear Fever,” she continued.

Barbara is the artist of “Herbie,” sponsored by Herb Real Estate; Melissa created the Richard A. Zuber Realty Bear, “Zoo-bear”; Lesta Bertoia is the artist for the Custom Construction Bear “White Bear” that resides at Good Shepherd Church of Christ.  An additional bear “Barb-bear-a” was added when one of Barbara’s clients expressed interest in buying “Herbie.” Barbara also created “Home Body,” sponsored by Glocker Real Estate.

Harry himself wrote about his famous chair design in a U.S. Steel Advertisement: “In furniture, as in sculpture, I am concerned primarily with space, form and the characteristics of metal. In the chairs which I had designed for Hans and Florence Knoll many functional problems had to be satisfied first. I wanted the chairs to fit as comfortably as a good coat. For flexibility in the basket construction, I used steel for strength and unified the design with nickel-chrome plating for beauty, giving the chair durability and lightness in appearance.”

Harry notes his sympathy with the Japanese idea of interior design: “the best furniture is no furniture at all. But if you will look at these chairs, you will find that they are mostly made of air, just like the sculpture. Spaces pass right through them…Besides, we don’t have the Japanese tradition in the West. We need more comfort. The human form can’t be redesigned, and chairs that really fit the human form are going to look a little sculptural.”

Willenbecher Thesis comments on the design in l958: “Actually the two problems are best solved simultaneously: The ultimate design of the mesh basket in the diamond chair is one that would seem to follow naturally from his particular way of thinking. He took a simple geometric figure (a small parallelogram created by the intermeshed wires) and repeated and reproduced it until the cumulative shape of the whole was identical with that of the original unit. This method is close to the chemical process of a crystal or a cell formation. The connection, then, between the sculpture and the chair is less in the direct application of similar visual forms as it is in the bearing of one man’s vision to two separate problems.”

Information for this essay quoted from The World of Bertoia by Nancy N. Schiffer and Val O. Bertoia, Schiffer Publishing Ltd. Atglen, PA, 2003.