Kressley Earns Second Modified Win of the Season at Grandview

BECHTELSVILLE, PA. August 23, 2020 . . . On the previous Saturday night at Grandview Speedway, Brett Kressley was forced to be a spectator for the 30-lap T.P. Trailers Modified NASCAR Advanced Auto Parts feature race rather than a participant due to a disqualification after a heat race incident. He returned this week with a score to settle and wasted no time charging from his ninth starting grid to the front of the 28-car starting lineup. Kressley, behind the wheel of the Kressley Auto & Truck Sales No. 19K, passed Richie Hitzler for the lead on the 12th lap and went on to score his second win of the season to increase his career win total to 14. 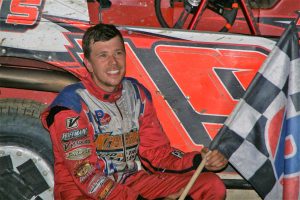 Chuck Eckert, son of the late Chargin’ Charlie Eckert, led the entire way in the 25-lap T.P. Truck Equipment NASCAR Sportsman feature for his first career to become the ninth different winner in the division. It was an emotional win for him as he was so happy to be standing in victory lane. 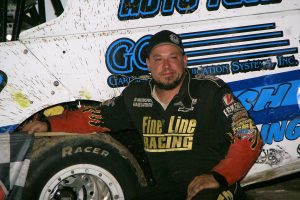 Modified and Sportsman feature winners that met the necessary requirements received monetary awards from T.P. Trailers and a certificate from VP Fuels for product awards. The Dan’s Deli ½-way hoagie award recipients were Kressley and Eckert. Jesse Leiby earned an extra $100 bonus from the track for being the highest crate engine finisher

Modified racing had Hitzler as the early pacesetter at the drop of the green.

The yellow was thrown with two laps completed after Craig Whitmoyer hit the backstretch wall. Ray Swinehart was also involved and they were both out of contention. Hitzler held his own on the restart followed by Brett Gilmore, Ron Kline, Kevin Hirthler and Kressley.

Kline and Kressley put on quite a battle for second which gave Hitzler some breathing room. Once Kressley cleared Kline, his next mission was to take control of first. 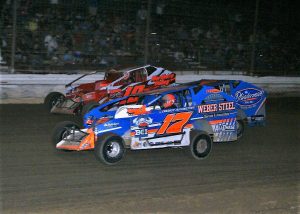 On the 14th lap restart needed when Kyle Weiss got sideways on the backstretch and slowed down causing Craig Von Dohren, left with nowhere to go, to make contact with him. Kressley was still at the head of the pack with second through fifth now comprised of Duane Howard, Hitzler, Kline and Louden Reimert. Trying to break into the top five was Mike Gular, which he did by overtaking third on lap 17 to pressure 357.

The front runners had a tricky situation to deal with as they approached lap traffic by lap 17 and had to use heads up driving.

With five laps remaining the running order behind Kressley, who ran the bottom lane in turns one and two and the high lane in three and four because he knew the order behind consisted of Howard, Gular, Rick Laubach and Weiss were in pursuit and he wanted to take their line away.

Kressley dealt with the lapped cars and never looked back until the drop of the checkered to be the second repeat winner of the season. Finishing second was Howard followed by Gular, Laubach and Weiss. Kline, Reimert, Ryan Grim, Jeff Strunk, last week’s winner, and Hirthler rounded out the top ten. 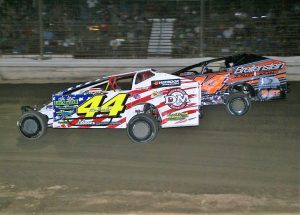 Heats were won by Hitzler, Jared Umbenhauer, Howard and Kline. Dylan Swinehart and Brad Brightbill, now driving the BMS No. 14, won the consies. 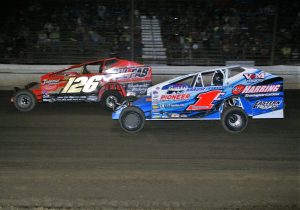 Before the first lap could be recorded in the Sportsman feature the red was out for a multi-car first turn tangle. The second try was thwarted as cars were spun in the second turn. Finally when action went green again Eckert was in the lead trailed by Scott Kohler, already a feature winner this season; Chris Esposito, Nathan Mohr and Kyle Lilick.

The red was thrown once again on the 11th lap when rookie Mark Gaugler rode the first turn wall with heavy impact. He was shaken up a bit and the car was destroyed. Eckert resumed the lead on the restart while Esposito, Brad Arnold, B. Hirthler and S. Kohler tried to unseat him. 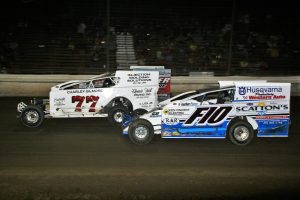 Eckert, a former Enduro driver that enjoys competing at the 1/3-mile oval and feels he needs more seat time, never surrendered the lead and went on to win the event. Esposito, who showed sportsmanship and congratulated Eckert finished in the runner-up spot trailed by Arnold, B. Hirthler and S. Kohler. Sixth through tenth were Jack Butler, Kyle Lilick, Mohr, Ryan Beltz and Jesse Leiby.

The month of August closes out for Saturday night stock car racing on the 29th with a tripleheader show that features the T.P. Trailers Modifieds, T.P.Truck Equipment Sportsman and Excel 600 Modifieds. Adult admission for the tripleheader is $18 while youngsters under are 12 admitted free. Racing gets the green at 7:30 p.m.

And on Saturday September 5 the Modifieds and Sportsman will be in action. Just two point events left in the season. Added on this night is the first “Hard Charger Challenge” which will feature racers now in the top 15 in Modified standings and have never won a Modified feature at Grandview.

Reminder: No NASCAR license is required for crew or fans. Drivers can purchase temporary licenses good for one event or 15 day license.

Lap sponsorships, $20 each, for the 50th annual Freedom 76, set for Saturday September 19, remain available by contacting Tommy Kramer or Tina Rogers at the track. Checks covering the laps to be sponsored, along with wording for the lap or laps, should be made payable to Grandview Speedway and mailed to 87 Wilt Road, Bechtelsville, PA 19505. For additional lap and event sponsorships please telephone Ernie Saxton at 267.934.7286.

Fans attending the Freedom 76 are advised that they can place campers on property on Thursday, September 17 and must be removed by Sunday, September 20.