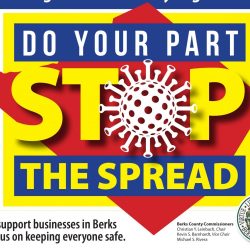 Reading, PA  — The Berks County Commissioners are pleased that Gov. Tom Wolf has responded to their call to reinstate the indoor capacity level for restaurants and bars to 50 percent. Gov. Wolf announced Tuesday, Sept. 8 that restaurants may increase their occupancy starting Sept. 21 if they commit to strictly comply to all public health safety guidelines and orders through a self-certification process.

The Berks County Commissioners, along with other county leaders throughout the state, have been advocating for the change since the Governor’s July 15 order that limited restaurants to only 25 percent capacity. The order was as a response to a rise in COVID-19 cases throughout the state and part of several targeted mitigation efforts for all Pennsylvania businesses in the food services industry. The Commissioners said the change proved to be detrimental to local restaurants and kept many from being able to turn a profit and remain open.

Commissioner Christian Y. Leinbach, who sits on several task forces with the County Commissioner Association of Pennsylvania, said he was involved in several calls in the past month asking for this change. He said he didn’t see any data to support the idea that restaurants were causing increases in COVID-19 cases and therefore believed it was unfair for those businesses to be restricted further.

“Many people may think the Commissioners are not doing enough, but we are often working behind the scenes to advocate for our community,” Leinbach said. “We succeed when we work together toward a common objective. In this instance, we took a strong, unified position and the Governor and his administration listened.”