The announcement came shortly before a Senate panel was set to consider the same move, prompting the administration’s critics to question the timing. 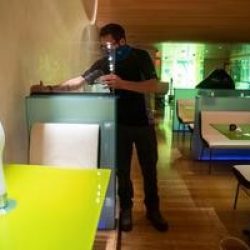 HARRISBURG — Gov. Tom Wolf’s administration preempted a Senate committee hearing Tuesday by announcing it would allow restaurants to serve more customers indoors, leading critics to question the timing of the move and whether it was based on data or politics.

On Sept. 21, restaurants can increase indoor dining to 50% of overall capacity. Health Secretary Rachel Levine said the decision was made because the state’s coronavirus cases have started to level off, though the statewide trend has been within the same range for about a month.

Newly reported coronavirus cases in the state declined until late June, before spiking over the next 45 days and then falling off once again, according to Spotlight PA’s data tracker. The daily numbers, however, have not returned to their all-time lows, and some areas of the state are seeing cases climb again as colleges and universities report outbreaks.

“Now we’re at the point where we feel that we can raise that occupancy limit but do it in a very safe way,” Levine said during a Tuesday press briefing, noting that previous spikes in cases were linked to people congregating at bars and restaurants.

Wolf’s announcement, issued as a press release Tuesday morning, did not explain why the administration set capacity at 50%, as opposed to another percentage, or chose the timing.

“The Wolf administration’s decisions surrounding the managing of the COVID-19 pandemic are data-driven, literature-based, and follow established public health practices,” Casey Smith, a spokesperson for the Department of Community and Economic Development, said in response to a request for comment. “We use statewide and national data, as well as peer-reviewed literature and guidance from the [Centers for Disease Control and Prevention] and White House when making public health decisions. Decisions are based on science and facts.”

The announcement came about an hour before a state Senate committee was scheduled to consider a bill with the same aim, leading Republicans who control the legislature to question the timing and what a spokesperson described as the “arbitrary nature” of the guidance.

“We continue to question the seemingly arbitrary nature of the announcements from the governor’s office, especially those that impact employers such as restaurants,” Jennifer Kocher, a spokesperson for the Senate Republicans, said in a statement.

In March, as the state began reporting its first cases of COVID-19, Wolf shut down much of the economy to slow the spread of the virus and keep hospitals from becoming overwhelmed. His administration gradually lifted restrictions on counties, eventually allowing bars and restaurants to operate at 50% capacity.

But in mid-July, as cases began to surge in parts of the state including Allegheny County, the administration decreased indoor restaurant capacity to 25% and ordered bars that don’t serve food to stop serving in-person customers.

Restaurants must continue to enforce physical distancing and require patrons to wear masks when entering, leaving, or moving throughout the establishment.

Business owners who want to expand operating capacity will be required to submit a statement agreeing to enforce those guidelines and information about the establishment’s maximum indoor occupancy. Restaurants that do so will be added to an online database.

Smith, the spokesperson for the Department of Community and Economic Development, said the self-certification documents will be available online starting Sept. 21. The need for translation services dictated the start date, she said. Restaurants that wish to increase capacity on that date must complete the process by Oct. 5.

Wolf also announced Tuesday that restaurants that serve alcohol will be required to stop sales at 10 p.m. Bars that do not serve food must remain closed to in-person customers, though they can continue selling alcohol to-go.

That’s a restriction some Democrats and Republicans in the state Senate want to see lifted.

An amendment unanimously approved by the Senate Law and Justice Committee on Tuesday would allow restaurants to serve alcohol to people who aren’t seated at a table and bars to sell alcohol without food.

Those changes are critical to helping many establishments — especially bars that rely on alcohol sales — to stay in business, said committee chair Sen. Pat Stefano (R., Fayette). He expects the full Senate to consider the bill later this month.

Levine said restrictions on bars remain to prevent people — particularly college students and young people under 24 years old, who have represented a significant portion of new coronavirus cases this summer — from congregating while drinking.

“We want people to avoid congregating together to stop the spread of COVID-19,” she said.

Stefano said he was happy to see the governor doing something to help businesses, but, like many Republicans, said the guidance was a reaction to legislation already in the works. A spokesperson for Wolf did not respond to request for comment.

“It’s been typical of the administration,” Stefano said, “to react to legislation that he will or will not veto.”