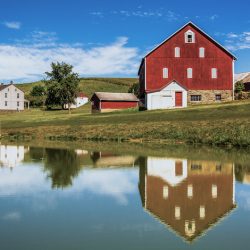 The lawsuit was filed Thursday in U.S District Court for the District of Columbia by the Chesapeake Bay Foundation and partners. It said the agency has failed to require that Pennsylvania and New York develop plans sufficient to meet pollution-reduction goals under the 2010 Chesapeake Bay Clean Water Blueprint. Pennsylvania has more than 25,000 miles of polluted streams, mostly from agriculture.

Harry Campbell, director of science, policy and advocacy in the Pennsylvania office of the foundation, said a favorable ruling would help get the resources needed to meet pollution-reduction goals.

“It would result in increased investments to help those 33,000-plus farms in the bay watershed of Pennsylvania alone implement practices to achieve this goal,” he said.

The attorneys general of Delaware, Maryland, Virginia and the District of Columbia will be filing a similar, separate federal lawsuit against the EPA.

“Pennsylvania has submitted a plan that only achieves about 75% of the nitrogen reductions that are necessary to meet water-quality standards,” he said, “and also identified a $324 million funding shortfall annually to implement that plan.”

He said the New York plan also falls short of nitrogen-reduction targets and fails to identify funding sources to meet the goals.

Campbell noted that a 2015 federal appeals court ruling affirmed the EPA’s authority and responsibilities under the blueprint, as well as the requirement that state plans include “reasonable assurance” they will succeed.

“It validates the partnership that is a federal-state cooperative and the science behind that approach,” he said. “along with the plans that are predicated and built to achieve the goals and objectives under the blueprint.”

He said the Clean Water Act requires the EPA to ensure that states develop and implement plans to meet their clean-water commitments.

The complaint is online at cbf.org.